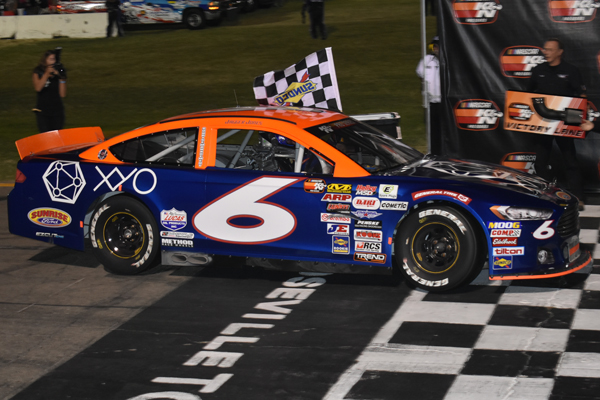 Hailie Deegan led qualifying, but her Bill McAnally Racing teammate Derek Kraus took over the lead at the start. Deegan and Jagger Jones collided for the second position on lap 25. Deegan spun but was able to continue as the race remained under green. Kraus had a physical battle in lapped traffic and eventually succumbed to a flat right rear tire, spinning down the backstretch to forfeit the lead on lap 58.

Jones assumed the lead while Deegan marched through the field on the restart. She passed Todd Souza for third on lap 84 and overhauled teammate Brittney Zamora later during the 46-lap green flag run. The run ended when Dylan Garner and Travis Milburn collided in turn four. Kraus missed out on the free pass with Buddy Shepherd getting his lap back instead.

Alaska’s Keith McGhee and Japan’s Takuma Koga had hard contact in turn one for the next caution on lap 124, placing Kraus back onto the lead lap. Jones, grandson of Indianapolis 500 champion Parnelli Jones, drove away for his first career win with Deegan second followed by Trevor Huddleston in third. Kraus made an outstanding bid from the back of the pack to finish fourth with Souza fifth at the stripe.

Doss’ victory in the NASCAR Late Models was his sixth triumph of the year along with setting a new track record in time trials. Jason Romero finished third to earn the 2019 championship. The championship is Romero’s fourth track title, adding to a 2009 NASCAR Late Model win and two Mini Stock trophies.

Romero qualified sixth and used the pole to gain an early advantage on the outstanding 18 car field. Madera’s Joey Iest jumped to second while a battle ensued between John Moore and Doss for third. Cole Moore and Matt Erickson came together in turn three for the first caution on lap 16.

Doss executed a crossover maneuver down the backstretch on the restart, charging from fourth to second. After following Romero for a few laps, Doss collided with Romero entering turn one on lap 21. Romero did not spin, but he fell to fourth as the caution fell. The running order remained unaffected and Doss fended off Iest on the ensuing restart.

Lance Halm and Michael Mitchell made contact in turn two for the next caution. A debris caution on lap 32 was followed by Matt Wendt and Chris Scribner tangling on lap 34. Iest escaped to the pits with mechanical trouble, yielding second to John Moore. Doss darted ahead for a 2.018 second victory while Moore held off Romero for third. Reno, NV’s Randy Hedrick and Cole Moore were the top-five finishers.

The NASCAR Modified championship finale was tumultuous with Loomis’ Nick Lyons outlasting a challenging night for the title. Matt Manolis led from the pole position but was passed by Eric Price on lap six.

Manolis and Kris Price banged wheels on the front stretch on lap 14, coming across the track into the path of Corey Englehardt for hard contact. Derrick Doering and Ralph Bailey collided behind them, flipping Doering onto his roof. Doering slid upside down for the length of the front stretch before hitting Manolis’ disabled machine and tumbling over. The incident ended Englehardt’s championship hopes and knocked Price and Doering out of the race.

Eric Price fended off a challenge from Nick Lyons for the victory with Lyons taking a title-deciding second place finish. Tyler Wentworth, Lincoln’s Mike Gorham, and Don Shala rounded out the top-five.

Carmichael’s Andrew Peeler won the 2019 NASCAR Super Stock championship on Saturday night. A three-wide battle for the lead opened the 30-lap feature with Roy Smith of Roseville driving underneath the cones in turn three. On the restart, Erick Ray and Billy Ray raced side-by-side in a father-and-son fight before Billy led lap seven. Second in points Dan Farrington of Roseville led the following lap.

Byron Gonzales quickly entered the picture, taking over the top position by lap 11. Gonzales drove ahead to his sixth consecutive victory with Farrington finishing second. Billy Ray, Peeler, and Erick Ray rounded out the top-five.

Tim Williams won an exciting F4 main event, leading just the final lap of competition. Vic Theberge of Citrus Heights jumped out to the early lead before third row starters Ray Molina of Roseville and Williams began to close in. By lap 11, the trio were virtually nose-to-tail.

On lap 13, Williams jumped outside of Theberge for a side-by-side battle over the final two laps. Coming to the checkered flag, Molina jumped inside for a three-wide run to the finish. Williams won ahead of Theberge and Molina. Molina’s eight victories plus Saturday’s third place finish wrapped up the 2019 championship.

The Mini Cups vs. Bandoleros had the closest championship battle of the season end in dramatic fashion. Loomis’ Kenna Mitchell and Fort Bragg’s Trey Daniels entered the main event tied in the standings after Mitchell led qualifying. The pair battled tooth and nail for the duration of the feature event, with Mitchell diving inside Daniels down the backstretch to lead lap 16.

Two laps later, Daniels attempted a pass into turn one on the inside of Mitchell. They collided, with Daniels spinning and being hit hard by Colton Nelson. Both drivers were uninjured. Mitchell was credited with the victory and the narrow two-point championship ahead of Daniels.

Ukiah’s Cole Brown had a successful debut in the Jr. Late Model division with a victory in the 20-lap feature. Kylie Daniels led the first eight laps before sixth starting Brown grabbed the lead on lap nine. Aidan and Kylie Daniels battled for second for several laps until Kylie spun in turn one for a caution on lap 16. Brown motored away from the Aidan Daniels over the final four laps for the win, followed by 2019 champion Brody Armtrout in third. Colorado Springs’ Holly Clark debuted with a fourth-place finish as well.

All American Speedway’s Month of Mayhem continues on Saturday with the Malicious Monster Truck Tour, Demolition Derby, and UTV racers competing in two complete shows. They will compete at both 2pm and 7pm. Tickets are on sale now both at the track office at 900 Riverside Blvd in Roseville or online at www.AllAmericanSpeedway.com