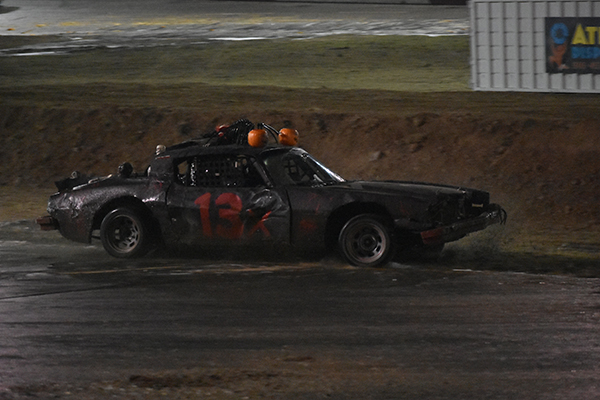 ROSEVILLE, Calif. (October 27, 2019) – A large crowd of race fans dressed in their Halloween best flocked to Roseville’s All American Speedway for the return of the Pumpkin Smash Enduro on Saturday night. Loren Chitwood made the most of the homecoming, scoring the $1500 victory after 100 laps of competition and three segments of racing. Dixon’s Richard Lavallee won the $1000 to win Riebes Auto Parts Trailer Bash as well.

Race fans helped smash pumpkins all over the one-third mile speedway – powered by Roseville Toyota -before a truck load of soap and water were applied to the surface. Chitwood started ninth but worked his way past Wes Brown for the lead on lap 21. Brown drifted back to fourth and was involved in a back-and-forth with Scott Woessner that included a grinding crash for a red flag. Brown managed to return to competition after losing several laps but Woessner’s night was over.

Chitwood smashed his way to the lead after the first 50 laps followed by Rio Linda’s Jose Hernandez and Stockton’s Adam Baggett. The second segment was a 30-lap run in the opposite direction around the speedway, again with a new application of a truck load of soap and water. Brown dominated the second segment with Chitwood coming on strong late to finish second ahead of Santa Clara’s Ken Winland.

For the third and final segment, racers ran through the infield and around tractor tires for a unique challenge. The 20-lap event on both dirt and asphalt saw Chitwood leading most of the way. His pace fell in the final laps, with Brown nearly stealing the victory in a close finish. Hernandez finished closely behind in third position for the segment as well.

All three runs were combined for the 100-lap final rundown with Chitwood scoring the overall win over Baggett. Winland finished third ahead of the team of Hernandez and Blake Disomma. Veteran drivers Gene Guinn and Lynn Everett rounded the top-six finishers.

Chitwood nearly doubled his pleasure in the 20-lap Riebes Auto Parts Trailer Bash. A competition caution on lap 15 bunched the field up for the finish. Chitwood lost his boat and trailer in the ensuing battling, knocking him out of the competition.

All American Speedway closes the curtain on 2019 this Saturday night with the $10,000 to win JM Environmental 100 for the Late Models. $1,000 will be on the line for the winners in both the Modifieds and Super Stocks plus elevated purses for F4 and Jr. Late Models. Mini Cups and Bandoleros will be competing as well. The busy night of competition will be capped by the final $1,000 to win Riebes Auto Parts Trailer Bash of the year. Tickets are on sale now both at the track office at 900 Riverside Blvd in Roseville or online at www.AllAmericanSpeedway.com

Additional details are available by calling the track info line at (916) 786-2025. All American Speedway is located at 800 All America City Blvd in Roseville. Entrance to All American Speedway for race fans is available on Event Center Drive through a signalized intersection with Junction Blvd. Enter “@the Grounds” into your favorite GPS device to get directions.