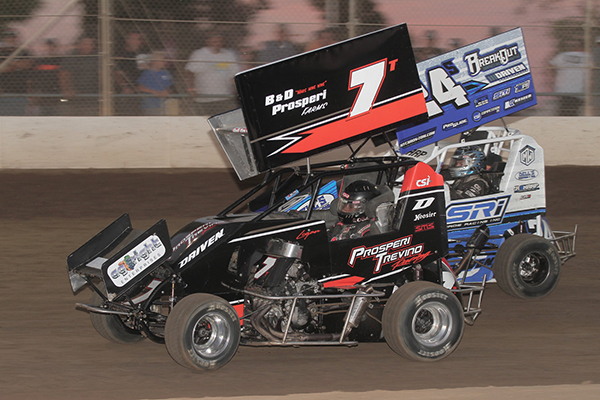 STOCKTON, CALIFORNIA (October 1, 2019) – Four $1,000 championships will be decided this Saturday to close the 33rd year of points racing at Stockton’s Delta Speedway presented by Financial Center Credit Union. The highly competitive 2019 campaign has seen drivers from across the west battling in Super 600, Non-Wing, Restricted, and Jr. Sprints at the 1/7th mile dirt oval track.

The championships serve as the precursor for the prestigious Turkey Bowl XIX, with the 19th running of the two-day classic scheduled for October 25th and 26th.

16 year-old Caden Sarale of Stockton has nearly completed the sweep of both Super 600 and Non-Wing championships. His Non-Wing effort was boosted by a victory on September 14th, lifting him to four victories and a 91-point advantage in the series. In 12 starts, Sarale has only two finishes lower than fifth along with six heat race wins.

Second in the standings is Turlock’s Chad Laughton who is winless but has had a consistent season with an average feature finish of seventh. His best runs of the season are a pair of third place finishes during the Summer Sizzler and the Dual at Delta. Three-time 2019 winner and former champion Brandon Carey of Ripon sits third in the standings ahead of two-time winner Mitchel Moles of Raisin City. 2018 champion Tj Smith rounds out the top-five. A 30-lap feature for $500 is on tap for Saturday night.

Sarale’s lead in the Super 600 division is much smaller with a 64-point advantage ahead of Moles. Sarale’s lone victory came during a sweep of both Super and Non-Wing on July 13th. His lowest finish of the entire 12 race campaign is a sixth-place effort.

Moles on the other hand has finished in the top-two seven times with three wins, but also has a DNF on his resume from the most recent event in September. 2018 champion Nikko Panella has three wins of his own, advancing to third in the standings and just 79 points out of the lead. Two-time winner Raio Salmon and 2014 champion Travis Labat round out the top-five. Super 600 will also compete for 30 laps and $500 to win this weekend.

Restricted represents the closest championship battle with Madera’s Logan Trevino trying to defend a 21-point lead over Jade Avedisian. Trevino has podiumed eight times this season versus Avedisian’s six podiums. Devon Courtnier’s string of three wins in a row in the middle of the year places him third in the championship, trailing Trevino by 46 points. Tied with Courtnier for third is Jeffrey Pahule, Jr. of Brentwood, aiming for his first feature win of the year on Saturday. Gauge Garcia of Lemoore sits fifth in the order. Restricted will compete for 25 laps and a minimum of $300 to win in their finale.

The Jr. Sprints championship is all but decided for Lucas Mauldin of Rancho Murieta, enjoying a 53-point lead over Kyle Fernandez of Tracy thanks to six victories. Fernandez has eight finishes on the podium but no wins. Colton Key is third in the points followed by Andy Hintz and TK O’Brien. The youngest drivers at Delta Speedway compete in 20 lap features that pay a minimum of $200 to the victor.

Pit gates open at 1 p.m. with the drivers meeting at 4:30 p.m. Hot laps begin shortly after with qualifying and racing to follow. Pit passes are just $20 with no membership required. Racers and race fans are encouraged to arrive early to enjoy some great Royce Farms BBQ at the races.