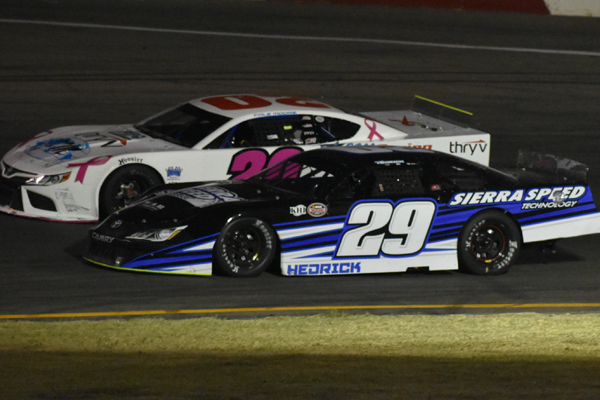 ROSEVILLE, Calif. (October 29, 2019) – Roseville’s All American Speedway will close its 2019 season in a big way, with this Saturday’s $10k to win JM Environmental 100 and the final Riebes Auto Parts Trailer Bash of the year. All six weekly divisions – Late Models, Modifieds, Super Stocks, F4s, Jr. Late Models, and Mini Cups vs. Bandoleros will be competing with the Trailer Bash closing out the evening.

The $10k to win Late Model feature is just one part of the lucrative awards. With $35,000 in posted awards, one of the highest-paying grassroots racing events in track history is expected to attract 100 race teams to Roseville. Race fans are eager to witness the fourth and final Riebes Auto Parts Trailer Bash of the season, after Dixon’s Richard Lavallee won Saturday’s battle during the Pumpkin Smash night. Drivers compete for 20 laps and the first car across the finish line with trailer attached earns the victory.

2019 All American Speedway NASCAR Late Model champion Jason Romero heads into the weekend aiming for the richest victory of his career. Romero is a four-time Roseville champ, claiming two Mini Stock titles to go with two Late Model crowns. Among his chief rivals in the JM Environmental 100 will be Upper Lake’s Jeremy Doss. Doss has a total of seven victories in 2019 at the speedway, including six in Late Models and the victory in the season-opening JM 127 for the SRL Southwest Tour. La Grange’s Matt Erickson has four career Roseville victories and a pair of televised Madera championships, but $10k to win races have eluded him thus far.

The winner of the 2018 Highline 150 for $10k to win was Bakersfield’s Buddy Shepherd, who is expected to return on Saturday night. Drivers from across the west have stated intentions to compete, bringing extensive touring and NASCAR resumes to the table. Even a pair of young USAC winners – Toni Breidinger of Hillsborough and Joey Iest of Madera – will test their mettle on the one-third mile.

Loomis’ Nick Lyons – the 2019 NASCAR Limited Modified champion – will try to continue an outstanding season in that division’s longest and highest-paying race of the year. The Super Stock race will be anchored by Carmichael’s Andrew Peeler, fresh off a narrow NASCAR track title of his own. Super Stocks has attracted pre-registrations that include former track champions Byron Gonzales, Chris Paulson, and Erick Ray. Several Stockton based drivers will be competing including Jeana Ramos and Harrison Stone.

Sibling rivalries will be represented throughout the night including Billy Ray and Ericka Ray, Mikala and JoJo Stearns, and Sadie and Dylan Krug.

The largest fields of the year are expected in both the 30 lap Jr. Late Model and 25 lap F4 races, while the Mini Cups vs. Bandoleros will get another chance to compete on a big stage after Kenna Mitchell’s tight championship win over Trey Daniels.

Action gets underway for the race teams on Friday night with practice from 5:00 p.m. to 8:30 p.m. Saturday sees the pit gates open at 11 a.m. for practice and qualifying. Grandstands open at 4 p.m. with opening ceremonies for this major fall time event at 5 p.m.

Ticket prices are $20 for general admission, $15 for seniors 65+, military, and first responders, and $10 for kids ages 6-12. Kids five and under are admitted for free! Tickets are on sale in advance by visiting www.AllAmericanSpeedway.com or visiting the track ticket office at 900 Riverside Blvd in Roseville. The office is open from 9 am to 4 pm Monday through Friday.