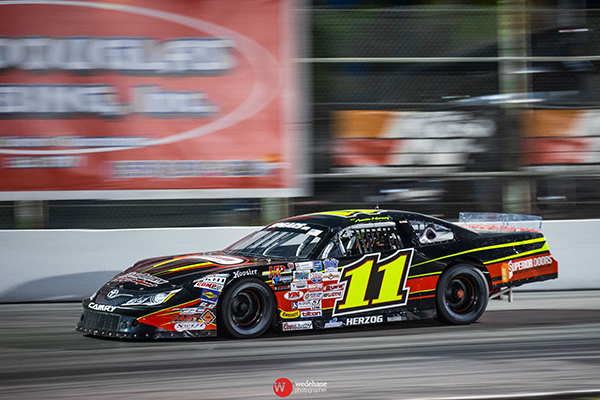 MADERA, CALIFORNIA (September 25, 2019) – The stars of the SPEARS SRL Southwest Tour will go head-to-head with some of the valley’s favorite stock car drivers, when the tour hits the one-third mile Madera Speedway for Saturday’s 125 presented by 51FIFTY LTM. The FAST 75 presented by General Tire for the SPEARS Modified Series will be the co-headliner. Hobby Stocks, Legends of the Pacific, Toyota Sedans, and Legends of Kearney Bowl will also be competing.

Both main events will be recorded by Madera Racing on MAVTV for a later broadcast on the motorsports network.

Herzog will bring some valley reinforcements into Saturday’s race with Ross Strmiska of Manteca returning to the series for the first time in 2019. Both Strmiska and Herzog will be in search of their first career series victories. Two of the top rookies in the SRL – Jesse Love and Eric Nascimento, Jr. – rank Madera as one of their home racetracks. Love is the two-time champion of the 51FIFTY Jr. Late Model Series and the winningest driver in series history. Nascimento hails from Lathrop and has a Madera Late Model victory under his belt. They too are looking for tour breakthroughs and aiming squarely for their first trips to SRL victory lane.

Dylan Cappello of Peoria, AZ leads the SPEARS Modified Series presented by Lucas Oil championship by 25 points over Ryan Schartau. Cappello came home second in the 75-lap contest in June behind Las Vegas’ Peyton Saxton. The win was Saxton’s first in the tour.

Cappello has since went on a tear with back-to-back wins at Kern County in June and Irwindale in July. Nevada’s Jeremy Kay was the runner-up finisher at Irwindale and ranks third in the points standings ahead of brother Cody Kay.

Lake Havasu City, AZ’s William Guevara is a career-best fifth in the championship and recently had his series-best third place finish at Irwindale. Las Vegas’ Kyle Keller, a graduate of Madera’s 51FIFTY Jr. Late Model Series, leads the rookie points from sixth in the overall order. Newhall’s Travis Thirkettle will make just his second start of the season hoping to improve on a second place run back in June of 2017 at Madera.

The Toyota Sedans points lead is held by Jason Lawton while Steve Schermerhorn leads the Hobby Stocks as he aims for a repeat championship. The Sedans are scheduled for a 25-lap main event while the Hobby Stocks will race 30 laps. Each division has one round to go – October 19th as the undercard for the $10,000 to win 400-lap Pumpkin Smash Enduro.

Legends of Kearney Bowl will make their seventh and final appearance of 2019 while the Legends of the Pacific will be in their fifth showing of the year. A 35-lap main event is on deck for the LoP.

Action gets started on Friday evening with practice from 4:30 p.m. – 9:30 p.m. Saturday’s program begins with pit gates opening at 12:00 p.m. Practices run from 1:30 – 3:45 p.m. with qualifying and heat races to follow. The SPEARS Southwest Tour will qualify at 5:30 p.m. followed by the Sedans, Hobby Stocks, and Kearney Bowl main events. Opening ceremonies commence at 7 p.m. followed by the Legends of the Pacific, SPEARS Modifieds, and SPEARS SRL Southwest Tour features.

Tickets for this busy evening of touring stock car racing are $20 for adults, $17 for seniors, $10 for youth ages 6-12, and kids five and under are free!

Madera Racing on MAVTV airs Thursdays every week. The show airs at 5 p.m. and 8 p.m. PST and is also available on the Lucas Oil Racing TV app. The fifth round of the 2019 Nut Up Pro Late Model Series airs this Thursday September 26th!