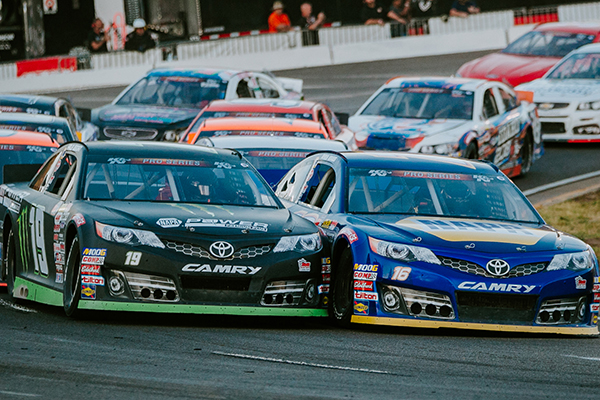 ROSEVILLE, Calif. (September 26, 2019) – One of the largest motorsports events in Northern California returns for the 21st appearance of the NASCAR K&N Pro Series, West in Roseville, when the NAPA Auto Parts / ENEOS 150 roars into the All American Speedway on October 12th. Exciting, door-pounding NASCAR short track racing comes to the one-third mile with the only national televised racing event in Placer County.

$3 from every ticket sold will support the California Peace Officers Memorial Foundation. The hottest ticket of the year also supports the Placer Breast Cancer Foundation with over $100,000 raised in event history.

Joining the NAPA Auto Parts / ENEOS 150 will be the championship finales for the NASCAR-sanctioned Late Models, Modifieds, Super Stocks, and F4s, plus racing for Jr. Late Models, Mini Cups vs. Bandoleros, and Legends of the Pacific. All told, eight main events and over 350 laps of competition are scheduled for over $100,000 in cash and prizes.

The NASCAR K&N Pro Series, West is the highest developmental level of NASCAR on the West Coast and has been competing since 1954. Some of NASCAR’s top drivers, including Cup Series champions Kevin Harvick and Joey Logano, started their racing careers in the K&N Series. Elk Grove’s Kyle Larson and Grass Valley’s Matt DiBenedetto are among the Northern California-based racers who were propelled up the ladder thanks in large part to the series.

A strong batch of NASCAR hopefuls will be competing, and it includes a pair of 18 year-olds. Championship points leader Derek Kraus of Stratford, Wisc. and second in points Hailie Deegan of Temecula, Calif. have taken the stock car world by storm. Kraus has eight career victories, while Deegan – the only female driver to win in the K&N Series – has three wins.

Third in the championship is 17 year-old Jagger Jones out of Scottsdale, Ariz. Jones is the grandson of the legendary Indianapolis 500 champion Parnelli Jones and is the leading rookie of the season. Southern California’s Trevor Huddleston and Washington’s Brittney Zamora round out the top-five in the championship.

Roseville’s NAPA Auto Parts / ENEOS 150 will mark the 12th round in the 14-race championship for 2019. Also in action will be the first NASCAR championships in Roseville in several years as part of the NASCAR Home Tracks program. Cameron Park’s Jason Romero has clinched the Late Model title, while battles continue in the other divisions. Points leaders include Loomis’ Nick Lyons in the Modifieds, Carmichael’s Andrew Peeler in the Super Stocks, and Roseville’s Ray Molina in F4s.

Mini Cups vs. Bandoleros are in a dead heat between Fort Bragg’s Trey Daniels and Loomis’ Kenna Mitchell. Smartsville’s Brody Armtrout leads the Jr. Late Model competition. The Legends of the Pacific touring series makes their second stop of the season after Nick Halen scored the win in August.

Posted in All American Speedway and tagged video, Work