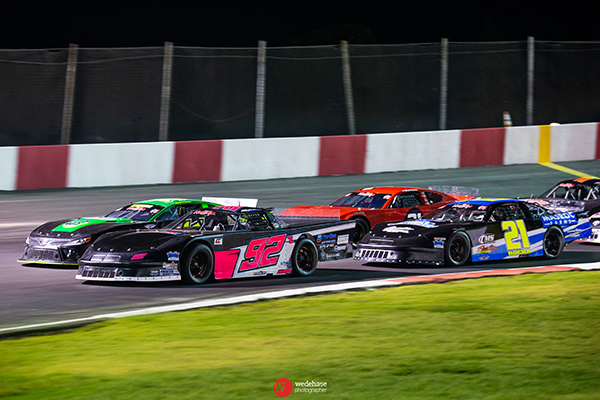 MADERA, CALIFORNIA (September 17, 2019) – A season full of MAVTV-televised Late Model excitement is reaching its pinnacle at Madera Speedway with Saturday’s round #8 for both the 51FIFTY Jr. Late Model Series and the Nut Up Pro Late Model Series. The races will serve as the final act before the curtains open on October 5th with the prestigious $10,000 to win Short Track Shootout. Championship competition for both the Mini Cups vs. Bandoleros and Modified Super Toyotas will also be served up this Saturday night.

Dylan Zampa of Napa, CA leads the Pro Late Model title fight by one of the narrowest margins across the top-four in track history. Perennial championship contender Austin Herzog, age 17 of Clovis, CA, has drifted to second in the standings but only 12 markers behind Zampa. Zampa has led 51 laps around the one-third mile this year including the $5,000 victory in the season-opener. The last two events have gone in Zampa’s favor with a second-place finish in the Summer Speedfest and a fourth-place finish in August. Herzog’s momentum has swung the other way, with a DNF in July and a ninth-place effort in August.

Edging into the picture is Atwater’s Jason Aguirre, just 22 points outside first place. He has four top-fives this year including three in a row. Just six points adrift of Aguirre is Carlos Vieira, who recently scored a Pro Late Model career-best second place finish in August. Jeremy Doss of Upper Lake is the only repeat winner this year with six different winners through the seven races. Two-time champion Buddy Shepherd of Bakersfield was the most recent winner with a strong performance in August.

80 laps of racing for $2,000 is on tap for the Nut Up Pro Late Models including a break at lap 50 for adjustments and MAVTV interviews.

16 year-old Joey Iest of Madera has pulled away slightly in the Jr. Late Model standings on the heels of three consecutive victories. His seven-race resume so far includes four wins, two second place finishes, and one third place finish against an average field of 18 cars per event. He has paced the field 191 times so far in 2019.

The drivers ages 10-16 years old in America’s original Jr. Late Model division have put on an impressive season of racing. Rookie Seth Wise of Bakersfield has kept Iest within arm’s length with a great season of his own, including six out of seven races on the podium. A win has eluded Wise but he may be in position to strike during Saturday’s 70 lap race.

Second year driver Jay Juleson, Bakersfield’s Kabe McClenny, and Temecula’s Jake Bollman round out the top-five in the standings. Vancouver, WA’s Jadan Walbridge has scored back-to-back fast-times and is quickly improving up to sixth in the standings ahead of Bakersfield’s Kercie Jung. Drivers from Nevada, Arizona, and New Mexico are among those expected this weekend.

Riley Massey of Bakersfield is trying to close out a repeat and continue her reign as the only Bandolero champion in track history. Massey won the inaugural 2018 title and has faced pressure this year from rookie Dylan Baptista and from Ethan Nascimento. The gap among the top three is just 20 markers. Massey has two wins and two second place finishes while Baptista and Nascimento each have one win. Other winners this year include Bakersfield’s Hank Hall and Arizona’s Jeffrey Erickson. Joey Kennealy leads the Mini Cup standings in his rookie season. 20 laps of racing is on the schedule for the youngest drivers at Madera Speedway.

Saturday’s program begins with pit gates opening at 12:00 p.m. Practices run from 2:00 p.m. to 3:30 p.m. with qualifying and heat races to follow. The Mini Cup vs. Bandolero feature is expected to be run at 5:30 p.m. Opening ceremonies are slated for 6:00 p.m. with both Late Model features and the MST main event afterwards.
Tickets are just $15 for adults, $13 for seniors, $7 for youth ages 6-12, and kids five and under are free!

Madera Racing on MAVTV airs Thursdays every week. The show airs at 5 p.m. and 8 p.m. PST and is also available on the Lucas Oil Racing TV app. The fifth round of the 2019 Nut Up Pro Late Model Series airs this Thursday September 19th!