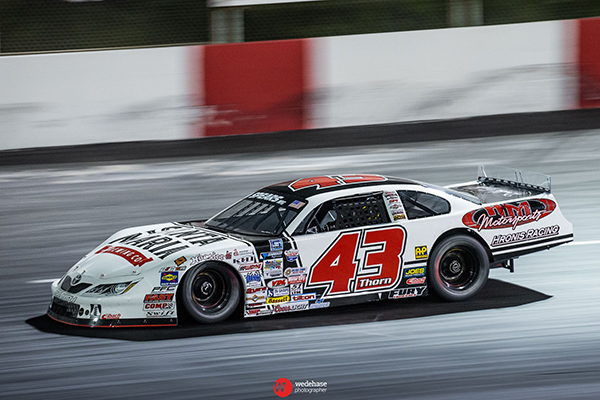 Hesperia’s Eddie Secord led 74 and three quarters laps of the FAST 75 presented by General Tire for the Spears Modifieds. He led the opening lap from the pole position while Cappello attempted to advance from his sixth starting position.

Cappello worked his way past Travis Thirkettle for third and then got around Galt’s Travis McCullough for second on lap 21. A pair of cautions for spins involving Salida’s Eddie Wilcox set up a great battle at the front of the field. Ninth starting Ryan Schartau, the incoming second in points, had advanced to third position and used the restarts to take away the second spot from Cappello.

Schartau hounded Secord over a lengthy green flag run, looking inside for the lead on lap 62 into turn one but he was unable to make the pass. Schartau’s car began getting loose in lapped traffic within the final ten laps, giving Secord an advantage of several car lengths. A caution on lap 73 involving Wilcox and McCullough set up a green-white-checkered finish.

Schartau dove underneath Second into turn one on the white flag lap. He remained alongside Secord down the backstretch into turn three. Schartau then went straight up the hill into Secord, then back down across the racetrack in a wild run to the finish. Schartau narrowly topped Cappello and Secord as they slid across the finish line, but Schartau was penalized for the incident. Cappello inherited the exciting win ahead of Secord and Lake Havasu City, Ariz.’s William Guevara in third.

Derek Thorn’s win in the SPEARS SRL Southwest Tour 125 presented by 51FIFTY LTM was much more decisive, charging to a 7.606 second advantage after a 105 lap green flag run to close the event.

25 cars started the event with trouble striking early for third starting Austin Herzog of Clovis. The 17 year-old was eliminated before the race went green with a broken right rear trailing arm.

Linny White of Colton jumped out to the lead from the pole position ahead of 2018 winner Jacob Gomes. Thorn knifed forward from his fourth starting position to quickly challenge White. Thorn was credited with the lead on lap six as the caution flew for multiple incidents in turn four.

Thorn picked the inside for the restart and held the top spot while intense three-wide jockeying took place behind him. It boiled over when Eric Nascimento, Jr. crashed hard on the front stretch to end his evening. Thorn picked the outside line on the following restart, before the race was red flagged on lap 19 for extensive fluid on the racing surface.

Thorn again went outside White for what would be the final restart of the race on lap 20, darting ahead once more with the lead. Rookie Tyler Fabozzi ran as high as third but slowly drifted backwards, being overhauled by both 2001 Southwest Tour champ Craig Raudman and points leader Cole Moore. Raudman eventually reeled in White, taking over second on lap 36. Raudman then clawed towards Thorn as they approached lapped traffic. Thorn managed to get through traffic cleanly to increase his lead after a short battle.

White closed on Raudman in the closing stages of the race but was unable to make the pass in intense lapped traffic. Meanwhile Moore lost a prolonged battle with Eric Schmidt for the fourth position. Gomes fell back to tenth position at the finish while Fabozzi was 11th.

Derek Thorn grabbed the $5,000 checkered flag ahead of Raudman, White, Schmidt, and Moore. The top-five were also the only lead lap finishers, with Blaine Rocha finishing sixth from one lap down.

The Legends of the Pacific had their final appearance of 2019 at the speedway with Nick Halen earning the victory. A caution at the start of the race ended the race for both Ethan and Chad Nascimento. Pete Soto led once the race got underway. Sheldon Crouse took the top spot on lap four using the outside line. Crouse’s race ended with mechanical trouble allowing Jr. Late Model regular Jake Bollman a chance at the lead.

Halen challenged Bollman for many laps, eventually taking the lead on lap 28 after a restart. The caution flew for a final time on lap 32 but Halen fended off Bollman on that restart en route to the win. Eddie Garone, Josh Fleming, and Clayton Travels rounded out the top-five.

Madera Speedway’s biggest stock car show of the year is coming up this weekend with the seventh annual Nut Up Industries Short Track Shootout. $10,000 will be on the line for the Nut Up Pro Late Models plus their series championship. They will be joined by the 51FIFTY Jr. Late Model Series finale and Mini Cup vs. Bandolero championship race. All three events are televised for MAVTV.

Madera Racing on MAVTV airs Thursdays every week. The show airs at 5 p.m. and 8 p.m. PST and is also available on the Lucas Oil Racing TV app. The fifth round of the 2019 51FIFTY Jr. Late Model Series airs on October 10th!

Posted in Madera Speedway
← Community benefit a focus for the NAPA AUTO PARTS / ENEOS 150BEST IN THE WEST READY TO BATTLE FOR $10,000 AT MADERA SPEEDWAY →