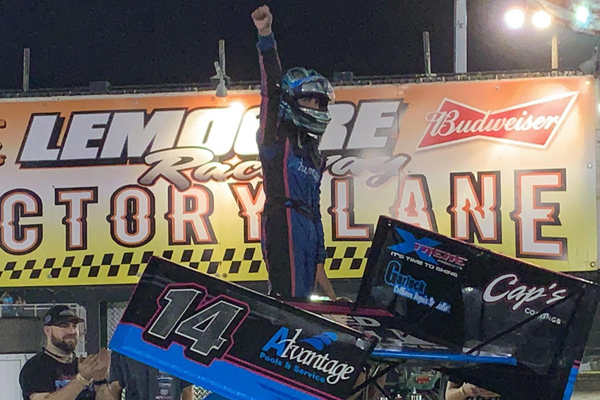 On Friday night, Avedisian competed at Keller Auto Raceway at Plaza Park in Visalia. She timed in second quickest in time trials with an 11.715 second lap, missing the quick-time by just .014 seconds.

Starting fourth in her heat race, Avedisian drove up to second position at the finish. Avedisian lined up fifth out of 12 cars for the 25-lap feature, after a six-car invert. Avedisian moved through the pack methodically, advancing into second position on lap 18 and then into the lead on lap 19. She started to run away from the pack quickly, charging to a 3.338 second advantage at the finish line for the feature win. The victory boosts Avedisian to just 25 points out of first place in the championship standings.

Riding a wave of confidence, Avedisian looked poised for a big night at Lemoore Raceway, where she is the current points leader. The tone was set early when she topped the 14 entries in qualifying with an 11.671 lap. She managed to finish third in her heat race and then benefitted from a number one pull for the invert.

Avedisian started her #14 Driven Chassis from the pole position and led all 25 laps. She faced tough competition from fellow Jr. Sprint graduate Dalton Parreira over the final laps but persevered for a .423 second victory. Avedisian’s 2019 campaign now includes nine victories at five different racetracks. She leads the standings at Lemoore Raceway by 40 markers, while ranking second at both Keller Auto Raceway and Delta Speedway in Stockton.

Delta Speedway presented by Financial Center Credit Union will host its fourth annual “Dual at Delta” this Labor Day weekend. Saturday and Sunday will each see complete points races at a critical point in the championship fight. Avedisian trails by just ten points heading into this weekend.