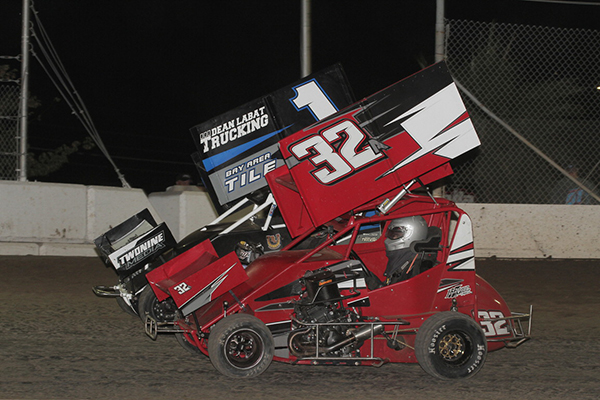 STOCKTON, CALIFORNIA (August 13, 2019) – The race for the championships at Delta Speedway presented by Financial Center Credit Union is reaching its peak heading into this Saturday’s points race #10. Super 600, Non-Wing, Restricted, and Jr. Sprints make up the four championship divisions on the 1/7th mile dirt oval.

Exemplifying the strong competition level at the speedway, all four points leaders were locked out of victory lane on August 3rd in points race #9.

Leading the charge was a big win in the Non-Wing division by 2016 champion Brandon Carey of Ripon. His second victory of 2019 places him just 27 points behind Stockton’s Caden Sarale in the standings. Sarale, the 2015 Restricted champion, also has twin wins on the year along with a second-place finish and a third-place finish. Turlock’s Chad Laughton is the only driver in the top-six without a win but has charged to third in the standings. 2010 & 2011 champion Dan Mognaga is fourth with 2018 champion Tj Smith in fifth. Mitchel Moles of Raisin City has one points win and ranks sixth in the order. The Non-Wing division races for 30 laps and $500 to win.

Super 600 has had a run of fresh faces in victory lane with 2014 champion Travis Labat getting his first 2019 win on July 27th before Cody Christensen had his first Delta victory of the season on August 3rd. Sarale leads the Super 600 order with a lone victory on July 13th when he swept both the Super 600 and Non-Wing races. He leads Moles by 57 points with 2018 runner-up Raio Salmon in third. Labat and 2018 champion Nikko Panella of Stockton round out the top-five. 2018 California Speedweek Restricted champion Dylan Bloomfield of Discovery Bay is the highest rookie driver in sixth. Super 600 also competes for 30 laps and $500 to win.

Gauge Garcia is riding a wave of momentum with back-to-back victories in the Restricted division. The driver out of Lemoore is the 2019 California Speedweek champion and also is in contention for the championships down south as well. Garcia is a distant fifth in the points at Delta, however, after missing a couple of rounds. Logan Trevino of Madera maintains a slim sevn point advantage over three-time winner Devon Courtnier of Elk Grove. Jade Avedisian is only 15 points out of the lead from third with Dixon point leader Jeffrey Pahule of Brentwood just 42 points behind the lead himself. The tightly wound battle will continue Saturday night in a $300 to win, 25-lap feature.

Visalia’s Jett Barnes won his fifth main event of the year at Delta last weekend but is not ranked in the championship standings. The only other driver to win a main event this year is Lucas Mauldin, parking it four times to lead the title hunt. Kyle Fernandez of Tracy is remarkably only 35 points behind followed by Colton Key, Rio Linda’s Andy Hintz, and Manteca’s TK O’Brien. Jr. Sprints are the youngest drivers at the speedway and compete for $200 to win in a 20-lap feature.

Pit gates open at 1 p.m. with the drivers meeting at 4:30 p.m. Hot laps begin shortly after with qualifying and racing to follow. Opening Ceremonies follow time trials and will include a parade lap for Filbert Coronado, father of racer Alex Coronado. Pit passes are just $20 with no membership required. Racers and race fans are encouraged to arrive early to enjoy some great Royce Farms BBQ at the races.