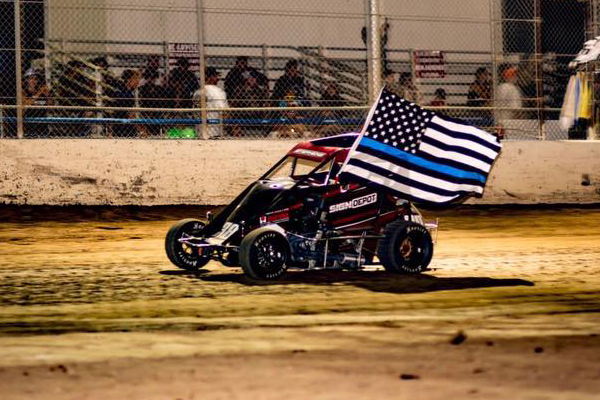 STOCKTON, CALIFORNIA (July 23, 2019) – Delta Speedway presented by Financial Center Credit Union will honor those who protect and serve with the fourth annual Law Enforcement Appreciation Night on Saturday night. All current and former Law Enforcement will receive complimentary admission. A special opening ceremony will include a parade lap on the 1/7th mile dirt oval track with the thin blue line flag. All four Micro Sprint divisions will be in action racing for their championship points.

Racing will start one hour later than usual due to forecasted high temperatures. The drivers meeting will be at 5:30 p.m. with hot laps and qualifying beginning at approx. 6 p.m.

The Law Enforcement Night has become a coveted race to win and one young driver from Stockton will look to continue his incredible run at the speedway. Stockton’s Caden Sarale swept both the Super 600 and Non-Wing main events on July 13th during Stockton Heat Night. It was Sarale’s second sweep of his career including August 18th, 2018 as well. The sweep has also propelled Sarale to the lead in both division’s $1000 to win championships.

Sarale’s Super 600 advantage is just 15 points over 2018 runner Raio Salmon of Fresno. Salmon has one victory this year. Third in the standings in 2018 champion Nikko Panella of Stockton, also with one win on the season. Mitchel Moles has won twice in his four starts from fourth in the points with 2014 champion Travis Labat of Livermore rounding out an all-star lineup in the top-five. Super 600 races for 30 laps and $500 to win.

A similarly strong roster makes up the top of the Non-Wing standings. Sarale has a seven-point advantage over 2016 champion Brandon Carey of Ripon. Two-time Non-Wing champion Dan Mognaga of Valley Springs is third with Turlock’s Chad Laughton and Madera Ranchos’ Dalton Hill making up the balance of the top-five. Hill has podiumed twice this year but is without a main event win. Non-Wing will also compete for 30 laps and $500 to win.

Restricted is a battle among three young drivers all using Driven Chassis with three-time winner Devon Courtnier emerging atop the tough group of young competitors. Logan Trevino of Madera led the standings early on before drifting two points behind. Trevino has two victories this season.

Jade Avedisian is having a career season with a points race win and a Speedweek win at Delta while also leading the Lemoore Raceway standings. She’ll enter Saturday’s races third in the Delta points but riding momentum after winning the $3,500 to win Clay Cup Nationals in Deming, WA. Jeffrey Pahule, Jr. is just 32 points out of the lead in fourth. Izaak Sharp of Grass Valley ranks fifth. Restricted compete for 25 laps and a guaranteed $300 to win.

Lucas Mauldin has been one half of the sweep by #55 cars of the Jr. Sprints features. Mauldin has won three features en route to a 22-point lead over Kyle Fernandez. Colton Key, Andy Hintz, and TK O’Brien round out the top-five. The Jr. Sprints compete for 20 laps and a minimum of $200 to win.

Pit gates open at 2 p.m. with the drivers meeting at 5:30 p.m. Hot laps begin shortly after with qualifying and racing to follow. Pit passes are just $20 with no membership required.