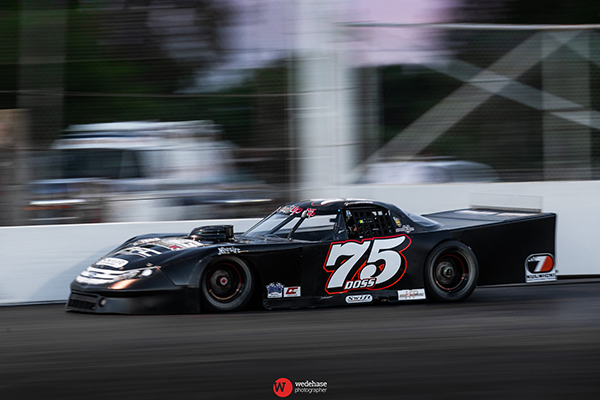 MADERA, CALIFORNIA (July 27, 2019) – A $5,000 check and a polish victory lap capped a challenging Summer Speedfest 100 on Saturday night at Madera Speedway, with Jeremy Doss winning the sixth round of the MAVTV-televised Nut Up Pro Late Model Series. Doss emerged as the first repeat winner of the year after starting tenth on a red-hot evening at the one-third mile asphalt oval.

Two-time series champion Matt Erickson led the opening lap from the pole before losing the top spot to season-opening $5,000 winner Dylan Zampa of Napa. A big crash slowed the action on lap four which included Toni Breidinger suffering heavy front-end damage. Garland Tyler and Dean Thompson went hard into the turn one wall as well. All three of their evenings were done.

Carlos Vieira slid inside after starting fourth to the lead on lap five, before Zampa took the lead back on lap six. The top-four ran two-by-two before Vieira was freight trained back to fifth position. Doss began to enter the picture, advancing to third on lap 20. He began to challenge 51FIFTY Jr. Late Model points leader Joey Iest of Madera for second and took over the position on lap 25. The caution flew that same lap for Racin Vernon of Bakersfield stopped in turn two with a flat tire.

A significant crash brought out another caution when Eric Nascimento, Jr. and incoming points leader Austin Herzog tangled battling just outside the top-ten. The grinding incident on the backstretch ended both drivers’ nights.

Doss took over the lead from Iest on the lap 27 restart. Meanwhile two-time defending Summer Speedfest winner Buddy Shepherd fell steadily through the pack to eighth position by the lap 40 break, then retiring with mechanical issues. Doss led Iest, Matt Erickson, Zampa, and ninth starting Blaine Rocha at the break.

The field battled hard for second place when the race resumed, with Strmiska using a restart to get the position on lap 47. Rocha meanwhile continued his march through the pack while 20th starting Tyler Herzog entered the top-ten. Davey Manthei, Jr. and Carlos Vieira came together for a lap 65 caution in turn one. Doss restarted outside Zampa, with Zampa shuffled back to fifth in the process.

Shelden Cooper lost an engine into turn three which collected Vieira and Parnelli Jones’ grandson Jace Jones for a lengthy red flag on lap 74. A three-wide battle ensued on the restart with Iest in the middle between Rocha and Strmiska. Iest and Rocha collided into turn one to send Rocha spinning from the top-five on lap 76. Erickson looked poised to capitalize in the standings on Herzog’s DNF, but he wrecked hard on the front stretch with Strmiska for another caution on lap 81.

Joey Iest’s Ironman-like performance included 170 laps of competition during an evening where temperatures soared above 100 degrees. He showed no signs of slowing down when he won the sixth 51FIFTY Jr. Late Model Series main event of 2019 against an outstanding 20 car turnout.

Rookie Jake Bollman led his first laps of Madera competition when he led the first five of the race. When the caution flew, Iest pounced on the opportunity to go to the outside for the lap six lead. Lilly Mead and Olivia Manke crashed in turn one while several other cars had damage for a red flag on lap 18. All drivers involved were uninjured.

Another turn one incident slowed the action a lap later. The race was fast-paced from there with Iest leading Wise through lapped traffic into the lap 40 break. Jaden Walbridge of Portland, OR, Bollman, and Juleson rounded out the top-five.

The return from adjustments saw Juleson challenging Walbridge for third. Juleson cleared Walbridge on lap 47. Bollman then ran on top of Walbridge for most of the run to the finish but couldn’t complete a pass. The final 30 laps went non-stop with Iest darting to a 1.367 lead for his third win of the season while Wise again settled for second. Juleson, Walbridge, and Bollman were the top-five.

Several incidents and four-wide racing highlighted an equally intense Mini Cup vs. Bandolero feature. Jeffrey Erickson made the most of his debut as he grabbed the surprising 20 lap victory. The turning point of the race came when points leader and 2018 champion Riley Massey hit the backstretch well in an incident with round one winner Dylan Baptista. Baptista ended up retiring from the race himself on lap ten with smoke from underneath the car as he entered the infield.

Erickson won by half a lap over Trenton Eurto with Aiden Phillips leading the Mini Cups from third overall.

Madera Racing on MAVTV airs Thursdays every week. The show airs at 5 p.m. and 8 p.m. PST and is also available on the Lucas Oil Racing TV app. The third round of the 2019 Nut Up Pro Late Model Series airs on August 1st!