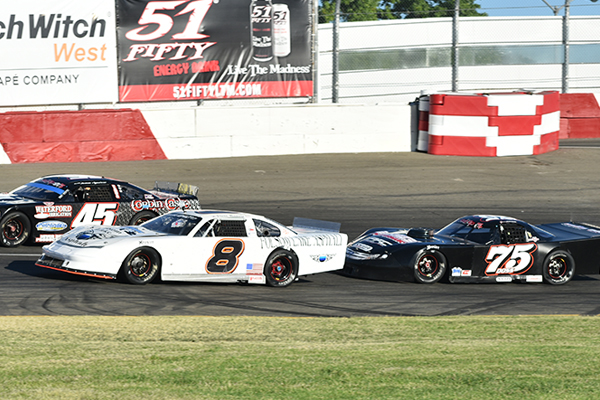 Romero’s third win of the season stretches out of his points lead over Loomis’ Michael Mitchell. For Doss, the win was his fourth in as many outings with a new car including victories during each of the last three twin bills at Roseville plus a televised win at Madera.

Ron Chunn of Elk Grove led 13 starters to the green flag while Doss, the fast-time qualifier, started seventh after the invert. Grand Marshal Ralph Sheheen was the honorary starter. Michael Mitchell spun in turn two for a caution on lap four. Loomis’ Chris Scribner used the caution to take the lead from Chunn on the restart from the outside line. Romero navigated past Chunn for second on lap eight. Three laps later, he cut inside Scribner down the backstetch to lead lap 11.

Chunn spun out in turn two on the following lap for a caution. The restart pitted Modesto’s Jason Aguirre alongside Romero and the pair ran side-by-side for several laps before Aguirre slid between Romero and Doss. Doss grabbed second on lap 21 but never could capitalize, with Romero taking a 1.2 second victory over Doss, Aguirre, Reno’s Randy Hedrick, and Scribner. Mitchell drove back forward to finish sixth.

The second 35 lap feature was a sprint to the front after an eight car invert from the first finish. Doss climbed forward quickly, overhauling Mitchell to lead lap nine. Romero’s run through the pack was a bit more prolonged in the non-stop feature. He finally worked up into second position on lap 23 but Doss had already accumulated a straightaway advantage. An entertaining duel broke out for third with Aguirre earning the position with just three laps to go. Doss nabbed the comfortable win ahead of Romero, Aguirre, Hedrick, and Scribner. Mitchell again placed sixth as well.

Lincoln’s Byron Gonzales used a strong outside maneuver to win his third consecutive Super Stock race. Multi-time track champion Erick Ray anchored the field with a five-car lead pack racing closely behind him. Contact between Ray and Chris Lambert on the front stretch ended Lambert’s race and necessitated a caution. Carmichael’s Andrew Peeler took over the lead while Gonzales advanced to second by lap 19.

Kris Price is now 2-0 with his NASCAR Modified, persevering during a shortened 20 lap feature. The opening lap was tumultuous when front row starters Don Shalla and 18 year-old Sammy Nuno drifted up towards the two wall. Nuno slowed and was tagged from behind by Matt Manolis. Second in points Corey Englehardt, Ralph Bailey, and Derrick Doering were all involved with significant contact, forcing a red flag. Nuno was eliminated from the race while Englehardt finished 11 laps down.

Tyler Wentworth of Roseville assumed the lead. Price and points leader Nick Lyons came together, sending Lyons for a spin on the backstretch and relegating Price to the rear of the field. Lyons was given his spot back and challenged Wentworth for the lead for several laps before they spun as well in turn one. That caution placed Bailey in the lead which he held for one lap before Price took over with the decisive pass. Price led Wentworth, Lyons, Bailey, and Niles Strever across the finish line.

15 year-old Aiden Daniels won his third Jr. Late Model event of the season, taking the 20 lap contest over 13 year-old Armtrout, Kylei Daniels, and 12 year-old Lane Anderson. His brother Trey Daniels won his fourth Mini Cup vs. Bandolero race. The 10 year-old from Fort Bragg ran side-by-side with Loomis’ Kenna Mitchell before Mitchell spun in turn four for a lap 12 caution. Mitchell came back through to finish second ahead of Hannah Ray.

Roseville’s Ray Molina continued a perfect F4 campaign by winning his fifth 20-lap race of the year. Molina ran side-by-side with his son Matthew Fuhs during the middle part of the race but ultimately pulled away. Vic Theberge of Citrus Heights finished third.

All American Speedway continues its NASCAR Whelen All-American Series action on August 3rd with the Back to School Night including giveaways for the first 300 kids under 15 in attendance. An essay contest will enter the kids into a drawing for a backpack full of special prizes. Contest details will be available on the track’s Facebook page and website on Monday.