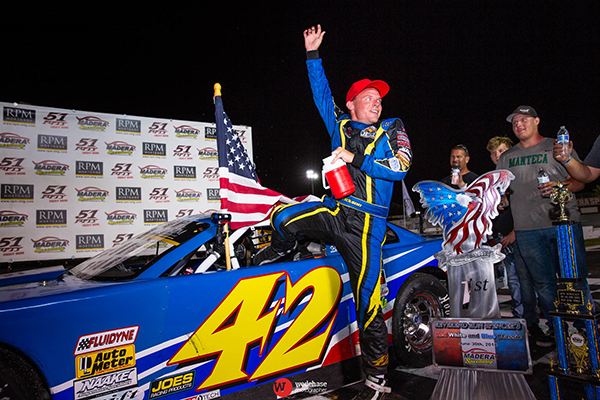 Drivers will be extra motivated to win against the patriotic backdrop and with the special tribute to one of the most popular members of the Madera Speedway family in track history.

Clovis’ Austin Herzog, 16, has been on a roll at the one-third mile oval.  The third-generation driver has a win and a fast-time along with an average finish of fourth across the four Nut Up Pro Late Model races in 2019.  Adding a fast-time and two wins in the non-televised Madera Late Model Series, and Herzog finds himself leading both the Pro Late Models and the combined “Overall Late Model championship”.

Herzog’s 14 point lead in the Pro Late Models comes ahead of 2018 51FIFTY Jr. Late Model runner-up Dylan Zampa, age 15 out of Napa, CA.  Zampa won the season opening event for $5,000 to win and has finished in the top-ten in all four events. He has failed to qualify in the top-five in the last two races, however, which has contributed to his 14 point deficit to Herzog.

Two-time series champion and all-time winningest driver Matt Erickson is chipping away from third in the championship.  Erickson has yet to win at Madera in 2019 but has crossed the stripe first on two occasions in Roseville this year.  He is also the defending winner of this event.  Fourth is Carlos Vieira who nearly won the season opener himself before tangling with Blaine Rocha.  Ross Strmiska rounds out the top-five.

Upperlake’s Jeremy Doss is planning to join the action for the $2,000 to win, 80 lap feature, adding to the intrigue.  Doss’ impressive career marks include over 30 SLM victories, two PCS championships, the 2018 SRL championship, and two runner-up SRL seasons as well.  He successfully debuted a new car in Roseville, picking up the win before turning his attention squarely on Madera.

A new driver has emerged atop the 51FIFTY Jr. Late Model Series with hometown favorite 16 year-old Joey Iest of Madera, CA on top.  Iest has a victory and a perfect four-for-four in podium finishes to lead the drivers ages 10-16 years old.  The young talent has been hounded all year by Bakersfield’s Seth Wise who has a trio of third place efforts himself.  Amongst a large pack of rookie drivers Wise has stood out by leaps and bounds.

Tyler Reif of Las Vegas was credited with his first win of 2019 and second win of his career on May 25th.  He ranks third in the standings over second year driver Jay Juleson and Tanner Reif.  Jake Bollman is the next highest 2019 rookie from the sixth position in the standings.  April 2016 race winner Austin Edwards will driver for Herzog Motorsports in Saturday’s 70 lap event in a bid to challenge for another victory.

Rounding out the MAVTV-televised activities is the Mini Cups vs. Bandoleros.  The Bandolero portion of the field has not had a repeat winner yet with all three grabbing their first career Madera wins. Ethan Nascimento won the season opener before rookie Dylan Baptista had top honors in the second event. Round three was won by INEX Bandits national points leader Hank Hall.

2018 champion Riley Massey leads the points by just one marker over Baptista with Nascimento in third.  The Mini Cups are led by rookie Joey Kennealy.

The undercard on Saturday includes special 48 lap races for the Modified Super Toyotas and Toyota Sedans.  Kurt Davidson and Purl’s Sheet Metal have posted a cash purse for the Sedan racers of $150 for first, $75 for 2nd, and $50 for 3rd for the special race.

Tickets for this great night of racing and fireworks are just $15 for adults, $13 for seniors, $7 for youth ages 6-12, and kids five and under are free!

Madera Racing on MAVTV airs Thursdays every week.  The show airs at 5 p.m. and 8 p.m. PST and is also available on the Lucas Oil Racing TV app.  The second round of the 2019 Nut Up Pro Late Model Series airs on July 4th.