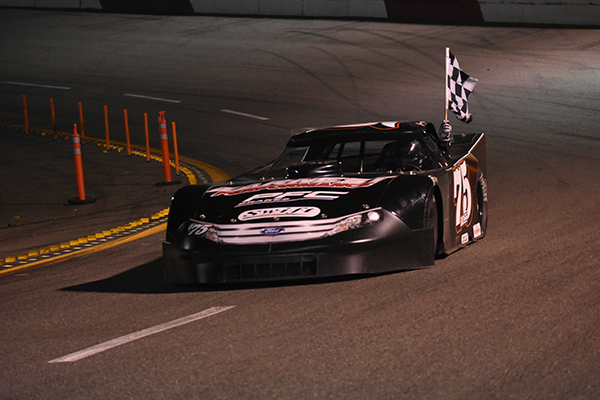 ROSEVILLE, Calif. (June 15, 2019) – Upperlake, CA’s Jeremy Doss made the most of his first NASCAR Late Model weekend at All American Speedway, winning the second 35 lap feature after finishing second in the opening race, before a packed house in Roseville on Saturday night. The multi-time touring stock car champion stood out among a field of 20 drivers from across the western United States battling for NASCAR state and national points on the one-third mile asphalt oval.

Granite Bay’s John Moore led the opening lap of competition in the second feature before a wild skirmish slowed the action in turn two. 14 year-old Cole Brown of Ukiah drifted up into Jason Romero, collecting Matt Erickson in a grinding three-wide crash down the backstretch. A lengthy red flag ensued where track officials ran the finale of the Cowboy Kenny Freestyle Motocross during clean up. Romero and Erickson used the down time to finish repairs to their cars, but Brown was unable to continue.

Moore led his son Cole Moore out of the restart while Daytona 500 starter Justin Marks of Rocklin fell back to fifth position. Doss knifed up to second by lap 11 and already started to reel in John Moore. Marks and Rick Scribner had a hard crash of their own down the front stretch that necessitated a lap 20 caution. Doss seized the opportunity to take the lead, using a strong maneuver to the inside of turn two to roar past Moore.

Doss never looked back en route for his second Roseville win of 2019 to go with his SRL Southwest Tour win in April. Fast time qualifier Michael Mitchell of Loomis finished third while Lance Halm and Kolby Juarez each had career best finishes to round out the top-five. The race was ended by a yellow checkered flag for curfew on lap 29, when Chris Scibner and Cole Moore tangled for fifth entering turn one.

The first NASCAR 35 lap feature was a runaway performance by Erickson for his second victory of 2019 as well. Erickson went around the outside of Doss to lead lap number one while Doss came back to lead laps two through six, bringing John Moore with him.

A caution slowed the action when Randy Hedrick of Reno, NV spun down the backstretch and was hit hard by Modesto’s Jason Aguirre. Both had their evenings ended prematurely. Moore grabbed the lead from Doss on the restart using the outside line while Jason Romero worked his way forward. Doss slid down the backstretch allowing Romero to advance to third.

Chris Scribner spun down the front stretch to force a caution period. An incident between race leader John Moore and the pace car saw officials penalize him to the rear of the field under the yellow. Erickson assumed the lead ahead of Romero. Romero went outside to lead lap 23 before Erickson led lap 24. Erickson then motored away to victory while Doss outfoxed Romero for second. Mitchell and Cole Moore rounded out the top-five.

In other action, Rio Linda’s Kris Price dominated his NASCAR Modified debut with the 30 lap victory. Tyler Wenworth led the opening two laps before Price took over. An entertaining race ensued behind Price with Wentworth attempting to fight off 2019 race winners Corey Englehardt and Nick Lyons along with that evening’s trophy dash winner, Mike Regalman of Manteca. Lyons and Wentworth got together on lap 11 but the race stayed green. Regalman retired to the pits during the non-stop feature on lap 25. Price led Wentworth, Englehardt, Lyons, and Josh Blackwood at the finish.

Former track champion Byron Gonzales debuted a new crate engine and won his first Super Stock race of the year. Harry Lambert hit the front stretch wall for an opening lap red flag, but he was uninjured. 14 year-old Billy Ray and past champ Chris Paulson battled for the lead early on before Dan Farrington took over on lap 11. Ray spun with a flat tire on lap 17, setting up a restart that Gonzales used to pass Farrington for the top spot. The top-five at the finish were Gonzales, Farrington, Peeler, Paulson, and Tony Latimer.

Roseville’s Ray Molina led the final 15 laps to win the F4 event ahead of Nevada’s Rich Ennis and Vic Theberge in his debut race. The Jr. Late Models were won by Calvin Hegje after an incident in turn two ended the race on the opening lap for both Lane Anderson and Brody Armtrout.

The youngest drivers at All American Speedway in the Mini Cups vs. Bandoleros had an entertaining race. Fort Bragg’s Trey Daniels led the first lap after starting fourth. A caution on lap 12 tightened things up front and allowed Kenna Mitchell to take the lead. Mitchell won over Daniels with dash winner Hannah Ray in third.

Hailie Deegan won the best out of three match races against her father Brian in a Father’s Day Special while the Cowboy Kenny Bartram Steel Rodeo Freestyle MX thrilled the fans throughout the festive night as well.

NASCAR racing continues at the All American Speedway on Saturday night July 6th with a full plate of NASCAR competition plus North State Modifieds and Big Rig races.