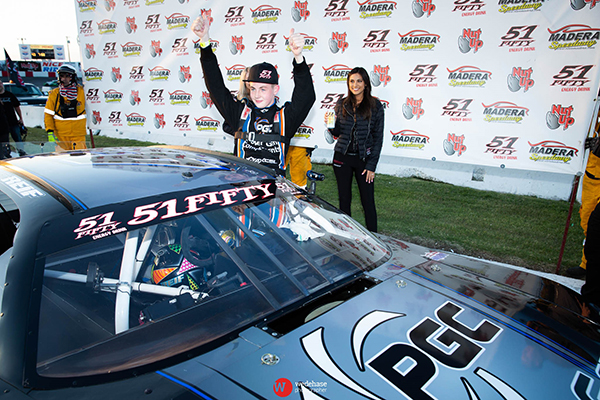 LAS VEGAS, NEVADA (May 30, 2019) – Reif Racing completed a clean sweep of competition in the 51FIFTY Jr. Late Model Series on Saturday night at Madera Speedway, running one-two in time trials and one-two in the 70 lap feature televised for MAVTV.

13 year-old Tanner Reif of Las Vegas continues to anchor the standings with the strongest start in series history. The third-year Jr. Late Model competitor picked up his third win of 2019 and eighth consecutive fast-time dating back to July of 2018 on Saturday night. Combined with a runner-up effort in round #2, and Reif has earned 233 points – a full eight points higher than 2017 champion Jesse Love’s season start through four rounds. He also has 210 laps led out of a possible 251.

Tanner and his 11 year-old brother Tyler ended practice ranked one and two and followed that up Tanner at 15.408 and Tyler at 15.466 seconds – just .058 seconds apart – to take qualifying.

The redraw went in Tanner’s favor with the driver of the #43 drawing the pole while Tyler would start sixth in the #7 car.

Tanner Reif led all 38 laps until the lap 40 scheduled break came two laps early. He charged ahead by 2.5 seconds out of the break while Tyler Reif worked his way up to second position by lap 63. A seven lap sprint to the finish pit Tanner vs. Tyler, with Tanner darting away for the victory while Tyler held off Joey Iest for second position. Tanner now leads the championship by 19 points over Iest while Tyler Reif has advanced to fourth overall.

The #43 team with Tanner Reif also ran their second Nut Up Pro Late Model event on Saturday night. The event was a huge success with Tanner qualifying in the fifth position to make the redraw. He started the main event ninth and ran as high as third as part of a large pack of Jr. Late Model graduates that battled within the top-ten all race. A late restart shuffled Reif back to sixth for another top-ten performance as the youngest driver in the series.

The first Jr. Late Model episode of Madera Racing on MAVTV will air on June 20th and will feature Tanner Reif winning the season opener. The show airs at 5 p.m. and 8 p.m. Pacific Time and also is available on the Lucas Oil Racing TV app.

Reif Racing and Tanner Reif will be traveling to Sonoma, CA during the NASCAR race weekend as a special guest of Madera Speedway for the 2019 West Coast Stock Car Hall of Fame banquet. Among the inductees in the MAVTV-televised event will be Jeff Gordon.