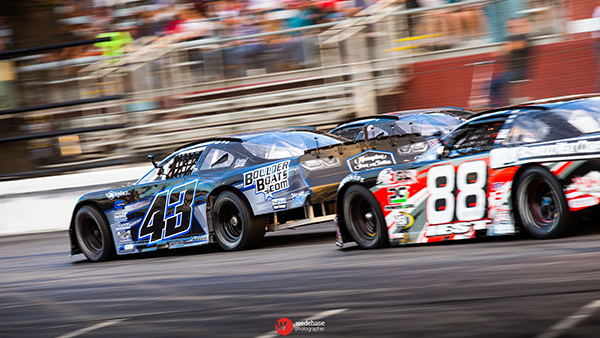 MADERA, CALIFORNIA (May 21, 2019) – MAVTV-televised Nut Up Pro Late Model and 51FIFTY Energy Drink Jr. Late Model racing returns to Madera Speedway on Saturday night during the coveted Military Tribute Night. The one-third mile asphalt oval will celebrate veterans and those who were lost fighting for our nation’s freedom. Mini Cups vs. Bandoleros, Modified Super Toyotas, and Toyota Sedans will also be competing. All military get in for free for this patriotic night of racing.

Memorial Day Weekend is perhaps the most prestigious racing weekend on the planet and the large fields of Late Models at the speedway will be hungry for round #4 victories. $2,000 is on the line for the Nut Up Pro Late Model action for their 80 lap main event.

The third-generation drivers representing the Herzog family have had a tremendous start to the season. Austin Herzog, 16, leads the Pro Late Model championship with a win and third place finish on his resume. His cousin Tyler has a pair of top-tens in the series while also grabbing two wins and two second place finishes in the non-televised Madera Late Model Series.

Thirteen year-old Tanner Reif of Las Vegas, NV is the points leader in the 51FIFTY Jr. Late Models for drivers ages 10-16 years old. The 2019 season has been one of the most competitive in series history with an average car count of 18 cars through the first three races. Reif is one of the veterans of the group that features nine drivers running their first full-season of competition. He leads the championship by 11 points on the strength of three fast-times, two wins, and a second place finish. His qualifying record shows seven consecutive quick-times since last July.

Sixteen year-old Joey Iest hails from Madera, CA and recently won his first career adult Late Model event when he won on Mother’s Day Weekend in the Madera Late Model division. Iest has hit the cycle at Madera thus far with a win, a second, and third for his second place in the Jr. standings. The battle for third in the standings is a close one between Jay Juleson, Seth Wise, and Tyler Reif. Just 14 points separates the trio.

The 51FIFTY Jr. Late Models race for 70 laps this weekend with a 40 lap opening segment and a 30 lap conclusion.

Mini Cups vs. Bandoleros rounds out the MAVTV-televised divisions that will be competing. Rookie Dylan Baptista swept the April 27th action with fast-time, winning his heat race, and taking the main event win in just his second ever Bandolero start. The Quarter Midget graduate leads 2018 champion Riley Massey and season opening winner Ethan Nascimento in the standings. Bakersfield’s Trenton Eurto and Nathaniel Edwards round out the top-five. Rookie driver Joey Kennealy leads the Mini Cup half of the field heading into Saturday’s 20 lap main event.

Jason Lawton has had a perfect season in the Toyota Sedans with six victories, twice defeating former champion Jillaun Holden for the honors. In Modified Super Toyotas Shawn Reynolds enjoys a five point advantage of Ryan Reynolds with prior champion Bert Stephens in third. Sedan graduate Kyle Labrie is having a great rookie season that included a win on Mother’s Day weekend to rank fourth in the series.

Action gets started on Friday evening with practice from 5 p.m. – 8 p.m. Saturday’s program begins with pit gates opening at 11:30 a.m. Practices run from 1:15 – 3:00 p.m. with qualifying and heat races to follow. The first set of main events starts at 5:00 p.m. including the Mini Cup feature and the Late Model B Main. Opening ceremonies are at 6:00 p.m.

Tickets for this great night of racing are just $15 for adults, $13 for seniors, $7 for youth ages 6-12, and kids five and under are free! All military will be admitted free of charge!