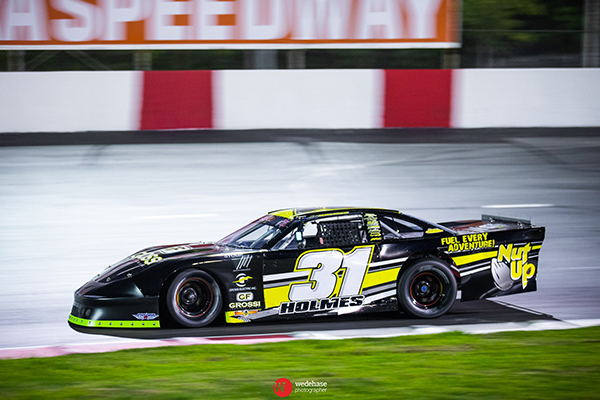 Driving a car that Holmes described in victory lane as the “best he’s ever driven” for Nascimento Motorsports, Holmes became the fourth different winner of the year in the hotly contested series. He won time trials then drew the pole position after the top-ten redraw.

The initial start served as a precursor for the wild race as third starting Racin Vernon spun Ross Strmiska entering turn one. Both drivers had to restart at the back of the field. Incoming points leader Austin Herzog battled with Jason Aguirre for third while Carlos Vieira and Blaine Rocha battled for fifth behind them. An engine failure for Tyler Herzog slowed the action again on lap 11.

Aguirre and Rocha ended up tangling in turn two on lap 16 for another caution period. On the restart, Vieira used the first of several strong outside maneuvers to take third from Erickson. Vernon’s attempt to come back through the field ended when he had a hard crash in turn one. The incident involving Glen Cook damaged both ends of Vernon’s car to end his evening. Rocha pitted with issues under the caution as well. On a lap 34 caution, opening night winner Dylan Zampa pitted with a flat right rear tire to surrender fifth position.

Erickson answered back to Vieira on the restart, using the outside to re-take third. Ryan Hart charged from 15th to seventh throughout the series of early cautions. Hart ended up in the middle of a three-wide battle that brought out the caution when Ross Strmiska and Eric Nascimento, Jr. made contact. The field battled to the lap 50 MAVTV break with Holmes leading Herzog, Erickson, Vieira, and 13 year-old Tanner Reif.

The field only completed one lap before the caution fell again on lap 51. The following restart was a wild one, as Vieira got sideways down the backstretch. Hart was turned from behind into the backstretch wall, then hit hard by both Erik Woods and Tim Skoglund. Hart remarkably continued on after extensive repairs. The scrambling shuffled Herzog back to fifth.

Holmes had a strong restart from the outside of Erickson while Vieira drifted as low as seventh position. Hart was involved in another skirmish in turn three with Rick Thompson forcing a lap 60 caution. Toni Breidinger spun with contact that sent Howard Holden’s hood flying through the air for an additional caution flag.

Holmes again out dueled Erickson on a restart while Blaine Rocha emerged as a challenger. Vieira spun out in turn four but was able to continue. Vieira ended up in the path of Holmes which caused some grief for the leader over the final five laps. Holmes managed to get around Vieira in the closing stages to take a six-car length over Rocha, Dylan Zampa, Erickson, and Herzog.

Tanner Reif added to his remarkable season with his third victory in the 51FIFTY Jr. Late Model Series. The Las Vegas 13 year-old has now led 210 laps over the course of the four races and has recorded fast-time in all four events as well.

Reif followed his fast-time with drawing the pole position over the 16 car field. The initial start was tumultuous just like in the Pro Late Models. Bakersfield’s Kercie Jung ended up on top of Jake Bollman’s car in turn one. Both managed to continue after repairs. A caution on lap seven involved Braden Connor of Las Vegas and Washington’s Kasey Kleyn spinning.

The evening saw a series of back-and-forth action as the outside line suffered on each successive restart. Joey Iest restarted outside Reif but fell into the clutches of Bakersfield’s Seth Wise. They battled side-by-side for several laps for second before the next caution on lap 20 for Connor spun again in turn one. Wise and Iest continued their action for the second spot and had some brief contact that sent Wise sliding.

Kleyn had additional spins on lap 26 and 34 that ended his night prematurely. Iest, Wise, and Jay Juleson battled for second through lapped traffic before a lap 38 spin for Olivia Manke brought the lap 40 scheduled break two laps early.

With adjustments complete and MAVTV interviews recorded, racing continued with Tyler Reif beginning to enter the fold. Tanner Reif built up a 2.5 second lead that was erased for a caution when Kabe McClenny’s car littered turn two with debris. Wise and Iest continued battling for second with Wise sliding up the race track to yield third to Tyler Reif.

Tyler Reif then took over second from Iest before a lap 63 caution set up a seven lap sprint between the brothers. Tanner Reif started inside brother Tyler and charged away for the victory with Tyler narrowly defeating Iest for second. Wise and McClenny rounded out the top-five.

Bakersfield’s Hank Hall returned to the Mini Cups vs. Bandoleros and won the Bandolero portion by leading 19 of the 20 laps of competition. Hall started fourth but quickly moved past opening winner Ethan Nascimento for the top spot. Round #2 winner Dylan Baptista challenged 2018 champion Riley Massey for second position before he spun on lap 14.

Massey chased Hall over the final six laps but couldn’t manage to get the lead. Hall led Massey and Nathaniel Edwards for an all-Bakersfield podium while Aiden Phillips of Atwater was the top Mini Cup finisher.

Ryan Reynolds topped a strong field for the Modified Super Toyota 25 lap victory. Patrick Geiger led the opening lap before Reynolds took over. A heated battle developed for second position between Geiger and Shaun Reynolds that lasted the duration of the event. Coming to the finish, the pair came together into turn three with Geiger spinning. Ryan Reynolds was victorious with rookie Kyle Labrie scored second while John McCullum overcame an early spin to finish third.

Up next for Madera Speedway is the MAVTV televised Lucas Oil Summertime Horsepower Nationals with the Spears Southwest Tour and the Spears Modified Series, Madera Hobby Stocks, and Legends of Kearney Bowl