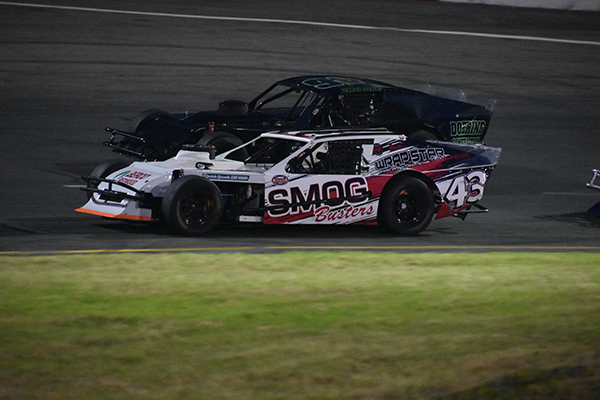 ROSEVILLE, Calif. (May 4, 2019) – The Riebe’s Auto Parts Trailer Bash was not the only racing to feature intensity and thrills on Saturday in Roseville, with Corey Englehardt and Nick Lyons each taking hard earned wins in the NASCAR Modified Twin 35 races at All American Speedway. A crowd of over 2,000 fans were on hand for the second night of action for five divisions of NASCAR racing.

Granite Bay’s Englehardt won the season opener for the Modifieds and was fast-time on Saturday night as well. 12 Modifieds staged for the first 35 lap contest, with Englehardt starting ninth after the invert. Matt Manolis was part of a three-wide duel at the start to the take the lead while Englehardt ended up collecting the turn three cones to bring out an early caution.

With the cones removed from Englehardt’s nose, racing resumed. Lyons looked underneath Manolis and took the lead on lap nine. Michael Mitchell of Loomis followed into second as well. Drivers raced two-by-two for third behind them. Several cars went to the pits during a lap 15 caution flag including Manolis with transmission issues.

The exclamation point of the race arrived on lap 32 when Englehardt made contact with the rear of Lyons for the lead entering turn one. Lyons spun and Englehardt suffered terminal damage for the race. Lyons was protected as the leader by race officials and given his spot back. Lyons never looked back to take the win over Auburn’s Derrick Doering and Josh Blackwood.

The second 35 lap main event lined up inverted from the first race results. It allowed Englehardt to lead lap one after starting second. The race was all green until a lap 15 caution. An additional caution brought the race to its critical restart on lap 21. Englehardt got sideways on the front stretch on the restart with contact from Lyons. Each car on the inside row suffered damage, including Mitchell’s rear body work being peeled back. All the cars involved were able to continue and the race was fully restarted.

Englehardt maintained the lead and withstood an additional restart with six to go to score his second win of the season. Lyons was second ahead of dash winner Tyler Wentworth, Mitchell, and Doering.

The newly combined NASCAR Super Stock division had perhaps its most competitive race with Roseville’s Dan Farrington coming out on top. A nine-car inversion forced Farrington, the fast-time qualifier, to earn his way to the front. Former Bomber track champion Blake Disomma was the early race leader while Farrington was up to second place by lap 12. Farrington jumped outside Disomma to take the top position by the 14th lap.

A caution on lap 19 erased Farrington’s lead over Andrew Peeler of Sacramento. After brief side-by-side racing, Farrington pulled away for a comfortable win. Peeler finished second while dash winner Gary Eisenhour was third.

Ray Molina won his second consecutive F4 feature by only leading the final lap of competition. Roseville’s Hailey Woessner led the opening lap before Matthew Fuhs took over. Molina ran all over the back bumper of Fuhs for the entire duration of the main event. On the final lap, Fuhs went low and Molina went high to take a lapped car three-wide. The maneuver worked for Molina as he narrowly beat Fuhs to the finish line by .101 seconds. Woessner finished third for an all-Roseville driver podium.

Trey Daniels of Fort Bragg won both the dash and the 20-lap feature for the Bandoleros. The 10 year-old driver has had a perfect start to his All American Speedway career.

Daniels faced early pressure from fast-time qualifier Dylan Krug of Rocklin before Krug spun exiting turn four on lap three. Loomis’ Kenna Mitchell took the opportunity to challenge Daniels for much of the race. Daniels pulled away late in the running for a commanding six second victory ahead of Mitchell and Hannah Ray rounding out the podium.

14 year-old Calvin Hegje of Orangevale won the dash and took the lead from the pole position. Daniels attempted to take over second from Smartsville’s Brody Armtrout but the two tangled into turn three. Both Brodie Reidman and Lane Anderson were gathered in the incident for a lap three caution. Armtrout and Daniels then had another incident into turn one as well, bringing out an additional caution flag.

Hegje slowed on the following restart with a flat tire which allowed Daniels to assume a lead he never relinquished. Armtrout finished second with Hegje returning to the race to finish third.

NASCAR racing continues at the All American Speedway on Saturday night May 18th with Late Models, Modifieds, Jr. Late Models, Super Stocks, F4s, Mini Cups vs. Bandoleros, and the touring Legends of the Pacific.