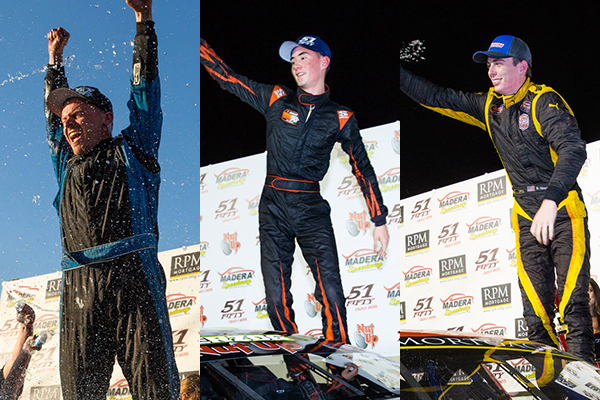 MADERA, CALIFORNIA (April 30, 2019) – Two brand-new MAVTV-televised series will get underway on Saturday night at Madera Speedway, with the POWRi/BCRA Midgets and California Challenge Cup stock cars set to compete on the one-third mile oval. Some of the best young talent in the nation will get an opportunity to shine in two very traditional forms of motorsports but under new platforms in 2019.

For the California Challenge Cup stock cars, their 100 lap debut is the culmination of a multi-year project by promoter Kenny Shepherd to introduce drivers to heavy, truck arm racing in an affordable way. The Challenge Cup will utilize mostly an existing inventory of race cars paired with a one set of tires rule that has attracted some strong competition.

“We are excited to launch the new California Challenge Cup Series that will provide a path upwards for our stars,” Shepherd said. “This will start small but I expect it to become one of the biggest series in the western United States over the next 12 months.”

The Vukovich Classic for the POWRi/BCRA Midgets will be a 50 lap contest honoring the Fresno-based family that included Billy Vukovich Sr. and Billy Vukovich III. Both started in Midget racing in the central valley before moving to the highest levels of the sport including the Indianapolis 500. Several of the young drivers in the POWRi/BCRA Midgets have the same hopes and a victory on Saturday night before the MAVTV cameras is a great opportunity for an open wheel resurgence.

Madera Speedway will present an outstanding undercard as well. For stock car fans, the Southwest Tour Trucks will make their first of two appearances of the year. On the open wheel side, the future stars in the USAC Western US Midgets will be competing in their Ford-powered entries. California Hard Tops and Legends of Kearney Bowl will help connect the Vukovich Classic past to present. The always exciting Legends of the Pacific for INEX Legends cars rounds out the evening’s entertainment.

Action gets started on Friday evening with practice from 5 p.m. – 8 p.m. Saturday’s program begins with pit gates opening at noon. Practices run from 1:30 – 3:20 p.m. with qualifying and heat races to follow. Opening ceremonies are at 6 p.m. with over 250 laps of scheduled racing to follow.

Tickets for the Vukovich Classic featuring the debut of the California Challenge Cup are just $15 for adults, $13 for seniors, $7 for youth ages 6-12, and kids five and under are free!