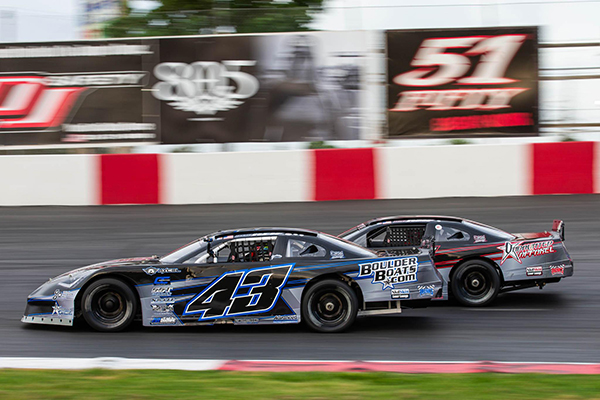 LAS VEGAS, NEVADA (April 30, 2019) – Tanner Reif scored his seventh consecutive fast-time and third career victory at Madera Speedway when he won Saturday’s 51FIFTY Energy Drink Jr. Late Model 70 lap race. The 13 year-old battled with his 11 year-old brother Tyler for the lead throughout the middle stages of the race in a competitive night for Reif Racing.

Tanner also made his debut in the Nut Up Pro Late Model Series as one of the youngest drivers in series history.

Time trials went favorably for the brothers as Tanner led the way with a 15.344 for his seventh consecutive fast-time dating back to last July. Tyler timed in fourth at 15.467 seconds on the one-third mile speedway. The redraw of the top-six qualifiers also went well with the Reif Racing team sharing the front row for the MAVTV-televised feature.

Immediately Tanner jumped out to the lead with his brother falling in behind him in second. Several cautions slowed the early action. Each restart saw Tyler attempt to challenge Tanner on the outside for a lap or two before Tanner was able to slide in front of him to maintain the lead. On lap 30, Tyler faced pressure from Joey Iest that resulted in contact to the left rear tire. The tire ended up lasting the rest of the way despite some concern at the race break on lap 38.

After the break for adjustments and TV interviews, Tyler Reif took the top position around the outside of Tanner. A caution on lap 41 brought them back together with Tanner coming through to lead lap 42. They raced side-by-side in lockstep with Tyler leading lap 43 by a nose. On lap 44, Tanner appeared to clear Tyler after an entertaining duel.

Two laps later, Tyler had an opportunity to look inside Tanner for the lead into turn one but he spun out trying to avoid making contact with his brother. Tyler put on a show coming through the pack, advancing back to sixth position in just 15 laps. He then used a three-wide maneuver down the backstretch to charge into fourth.

Tanner Reif scored the victory to extend his points lead to 11 points while Tyler Reif finished fourth and is just 13 points out of fourth in the standings.

Tanner’s debut in the Pro division produced a top-ten finish that nearly became a top-five. Reif started 11th and was a major part of a large pack of cars that raced side-by-side for the fourth position. At one stage, the battle was eight cars deep. His #43 Victory Circle chassis ran strong on the bottom lane as he passed several Jr. Late Model graduates and Pro Late Model race winners. By lap 30, Reif found himself challenging from the sixth position.
After the lap 50 break for adjustments, Reif dropped as low as 12th but drove as high as seventh. A busy night of racing and battling ended with Reif finishing ninth in his debut out of 18 lead lap cars from 24 starters.