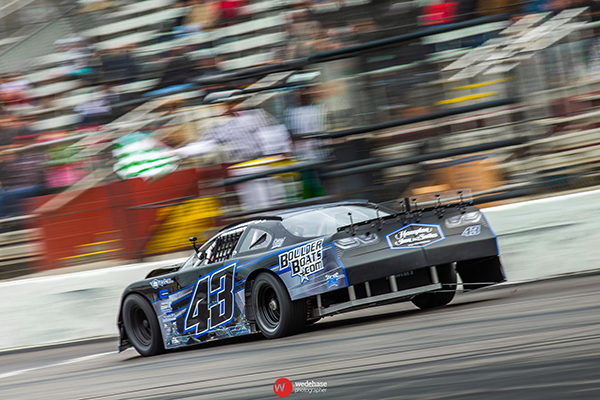 LAS VEGAS, NEVADA (April 3, 2019) – Las Vegas brothers Tyler and Tanner Reif are set for round two of the 51FIFTY Energy Drink Jr. Late Model Series this weekend at Madera Speedway. Tanner Reif enters Saturday’s 70 lap feature looking for his second consecutive victory while Tyler Reif will look to improve upon his performance in round one.

Tanner, age 13, charged to the front of the 20 car field on the one-third mile oval in March’s opening race. Under threatening skies, Tanner led qualifying for his fifth consecutive Madera Jr. Late Model quick-time. After earning that $100 bonus, he pulled fifth starting position in the redraw and methodically knifed his way through the pack. He steered his #43 Victory Circle Chassis up into second just 15 laps into the event. He grabbed the lead on a lap 30 restart and held on through a lap 32 caution before the race was called due to weather. In his last five starts at Madera, Tanner Reif has recorded five fast-times, two wins, and a second place finish.

“Winning round #1 was my goal and I plan on doing it again this weekend,” Tanner Reif said.

11 year-old Tyler Reif showed race winning speed in the opener. He started sixth but had his brand-new Jackson Race Cars #7 car up into second early on. He followed closely behind the race leader before spinning in turn three and having to restart at the back of the field. The back of the pack proved treacherous with Reif being spun out twice. He settled for 13th but still scored the third fastest “best lap” of the field of 20 cars.

“Sometimes you just have bad luck,” Tyler Reif said. “I’m looking to have my first podium finish of the year this weekend!”

Action gets started on Friday evening with practice from 5 p.m. – 8 p.m. Saturday’s program begins with pit gates opening at 11:00 a.m. Practices run from 1:15 – 2:55 p.m. with qualifying and heat races to follow. The first set of main events starts at 5:00 p.m. including the Mini Cup feature and the Late Model B Main. Opening ceremonies are at 6:00 p.m.