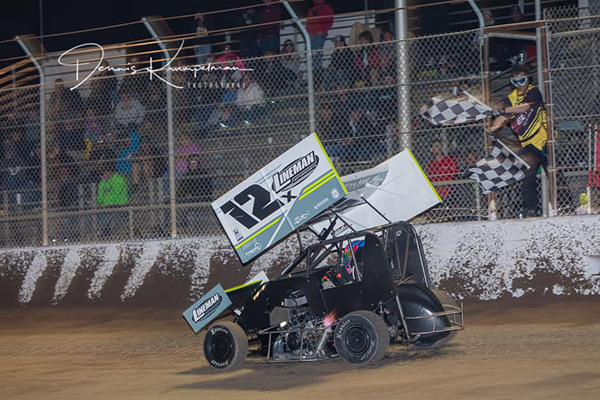 Drivers have their eyes on the lucrative $1000 championship prizes that await with 14 points races ahead of them. More than 60 drivers appeared for last weekend’s Play Day. An equally impressive field came out for the non-points World of Outlaws special on March 17th. Each is an indication that all four divisions should feature a variety of drivers with a strong chance to visit victory lane.

The 2018 Super 600 championship was a close one between Nikko Panella and Raio Salmon. Stockton’s Panella came out on top and was fourth in the non-points event earlier this year. Jake Hagopian won the $500 race for his second triumph in the four runnings of the opener. Hagopian and Faccinto were the main instigators in a close battle for the California Speedweek championship in 2018 with Hagopian topping Faccinto in that duel as well.

Mitchel Moles set the tone on the Non Wing season with his $500 win over 2018 track champion Tj Smith in the WoO special. Fellow former Non Wing champion Dan Mognaga finished fourth with sophomore Non Wing standout Caden Sarale sandwiched in between in third. Smith, Mognaga, and Sarale are poised to be perennial favorites on a regular basis. Both Super 600 and Non Wing will stage 30 lap features this weekend.

Jade Avedisian scored her breakthrough Restricted win at Delta Speedway. It was her first Restricted win at Delta and second for her young career. Logan Trevino, Brody Petrie, Hailey Wood, and Gauge Garcia rounded out a diverse crop of young talent in the $300 to win feature. 25 laps are on tap for these young drivers on Saturday.

One of Delta’s youngest drivers is Jett Barnes, winner of the $200 to win Jr. Sprints opener ahead of Cash Lovenburg and Kyle Fernandez. The youngest drivers at Delta Speedway compete in 20 lap main events with dual heat races in leu of qualifying.

Pit gates open at noon with the drivers meeting set for 4:30 p.m. Hot laps begin shortly after with qualifying and racing to follow.

Pit passes are just $20 with no membership required. Grandstand tickets are $10 for adults, $5 for kids 6-12, seniors 55+ and military, with kids 5 and under free! Tickets and pit passes can be purchased in advance at deltaspeedway.myracepass.com