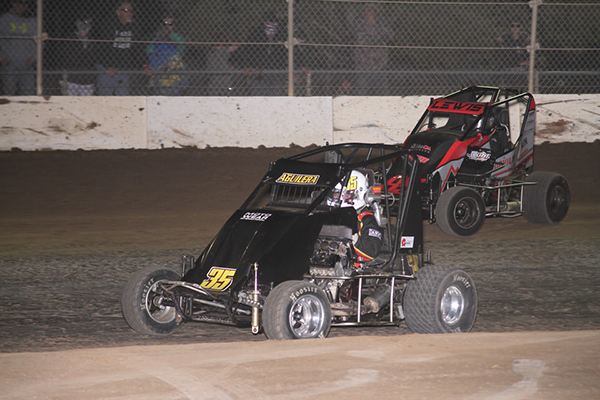 STOCKTON, CALIFORNIA (March 12, 2019) – Delta Speedway presented by Financial Center Credit Union will start the engines on its 33rd season this Sunday evening, with the fourth running of the WoO Weekend special. The non-points event celebrates the World of Outlaws competing at the adjacent Stockton Dirt Track the night before. It allows the Super 600, Non Wing, Restricted, and Jr. Sprints drivers to knock the rust off and participate as part of the March swing for dirt open wheel racing.

The 1/7th mile dirt oval will come to life again under the tutelage of Bob & Tiffanie Panella, who have extended their promotion of the San Joaquin County Fairgrounds track for the next five seasons. 14 points races will be presented along with special events such as the Hoosier Tire California Speedweek in June and Turkey Bowl XIX in October.

The 2018 edition of the WoO Weekend special was cancelled due to rain. In the other three editions, Non-Wing has been dominated by track champion Tj Smith. Smith has qualified in the top-two in all three attempts and has a win and second place finish to go along with it. Other Non Wing winners in the special have included Dan Mognaga and Cory Elliason.

Jake Hagopian has enjoyed great success in the Super side of the event, snaring top-twos in all three starts. He won the debut in 2015 before a narrow loss in 2016 to Heath Duinkerken. Alex Panella won the main event in 2017. His younger brother Nikko Panella is the defending track champion in the division.

Restricted has not had a repeat winner and the race has been a trailblazer for future stars in the sport. Both Joey Ancona and AJ Harbaugh have advanced to Sprint Cars while Bakersfield’s Brody Fuson competed extensively in Non Wing Micros in 2018 after winning in 2017. Caeden Steele is the 2018 Delta Speedway Restricted champion.

Jr. Sprints have taken advantage of their great platform during this special event as well with Garth Kasiner winning the inaugural running before former track champion Isabel Barnes won in both 2016 and 2017. Dalton Parreira had a dominating 2018 campaign to win the Jr. Sprint track championship and moves into Restricted this year.

Pit gates open at noon with the drivers meeting set for 3 p.m. Hot laps will begin at 3:30 p.m. with qualifying and racing to follow.

Pit passes are just $20 with no membership required. Grandstand tickets are $10 for adults, $5 for kids 6-12, seniors 55+ and military, with kids 5 and under free! Tickets and pit passes can be purchased in advance at deltaspeedway.myracepass.com