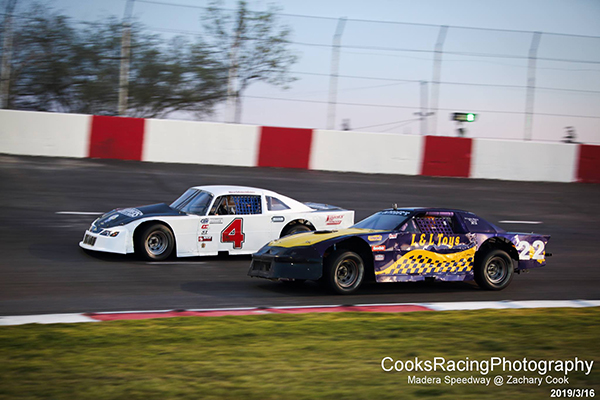 The April 13th opener will pay a guaranteed $750 to win and $100 to start. Madera Hobby Stock rules will apply include Hoosier 970 tires on all four corners. A Dash for Cash is planned along with heat races and the main event. For the featured North State Modified race, their season opening 60 lap contest will pay $2000 to win. The night’s action will also be live streamed on the race track’s YouTube page “Short Track TV” as well.

Other divisions competing on the card include the Madera Late Models, the non-televised portion of the stock car action at the speedway. Tyler Herzog has won both races so far in 2019, with previous champions Jason Aguirre and Matt Erickson hot on his heels. The NCMA Sprint Cars continue their traditional open wheel action while the cars of the past in the Legends of Kearney Bowl will hit the track.

Both of Madera’s regular entry level divisions, the Modified Super Toyotas and Toyota Sedans are scheduled. Jason Lawton has claimed victory in both Sedan races so far by comfortable margins. In Modified Super Toyotas, Shaun Reynolds has a win and a second place finish to lead the points over former track champions Ryan Reynolds and Bert Stephens.

Action gets started on Friday evening with practice from 5 p.m. – 8 p.m. Saturday’s program begins with pit gates opening at noon. Practices run from 12:45 – 3:00 p.m. with qualifying and heat races to follow. Opening Ceremonies will be at 5:30 p.m. with main events to follow.

For more information about Madera Racing on MAVTV please visit www.racemadera.com or www.mavtv.com.