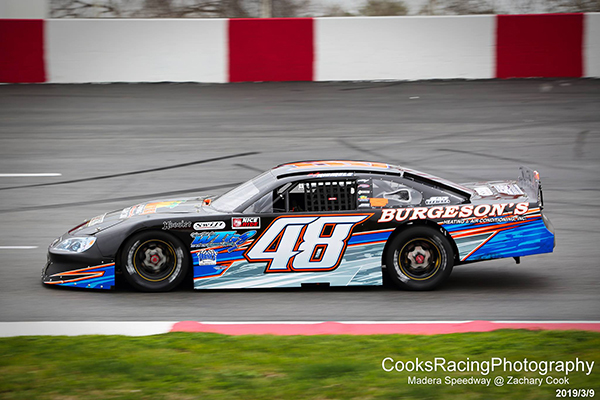 Kiemele and his crew spent Friday practice dialing in the car before Saturday’s qualifying and feature race. He was fourth quick in an abbreviated Saturday practice as wet weather started to move into the area. The Amelia Earhart Middle School student then qualified third in time trials. He missed out on fast-time by just .090 behind several veterans of the series.

The top-six drivers redraw for starting positions and Kiemele drew the outside pole for the 70 lap scheduled race. He swept around pole sitter Jay Juleson to lead the opening lap of competition. He maintained the lead through a series of cautions for spins.

Kiemele surrendered the lead when he spun as well on lap eight. The field of young drivers did an admirable job to avoid his car in turns three and four. He reported a problem with the throttle on his #48 Unlimited Landscaping / Burgeson’s Air Conditioning Chevrolet under caution. His Pathfinder Chassis powered by a 602 crate engine eventually had to be pushed off the track with a broken throttle linkage, ending his night prematurely.

In just 11 laps of competition he still managed to record the fourth best lap of the race and now begins looking forward to April 6th for round #2 of the series.

Madera Speedway created the Jr. Late Model division for drivers ages 10-16 years old in 2016. The fourth season of the series has seen it grow to nine 70 lap races with 20 drivers from four states on hand last weekend. Kiemele spent 2018 preparing for Madera by competing in Jr. races at Irwindale and Las Vegas, scoring a pair of victories in the process.

He previously competed in Bandoleros in 2017, finishing fourth in the national standings. His performances at Las Vegas in both the Jr. Late Models and Bandoleros earned him the nickname “The Showstopper” from the track announcing crew.