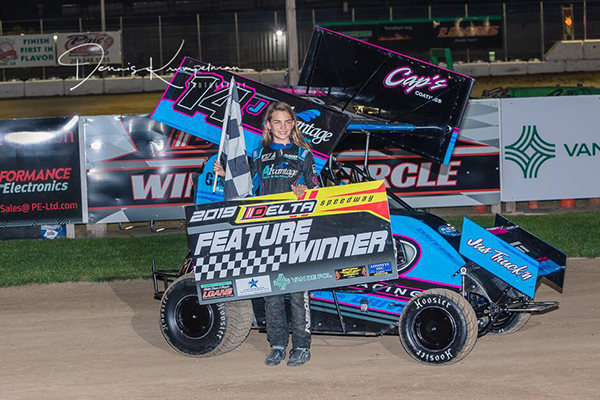 Avedisian is entering her second full season of Restricted competition. In 2018, she scored eight top-fives including four podiums and a victory at Keller Auto Raceway in Visalia. She opened 2019 with a fourth place finish in the prestigious Tulsa Shootout.

The 2016 USAC Jr. Sprint National Champion started off the afternoon running second in hot laps. She followed that with a fast-time in time trials, running a personal best 10.027 on the 1/7th mile dirt oval.

She ran second in her ten lap heat race behind fellow female competitor Hailey Wood. A zero inversion was spun by a young fan in the stands to place Avedisian on the pole for the 25 lap feature.

A red flag stopped the action early on lap three. A multi-car crash on the backstretch forced another prolonged red flag on lap seven. Avedisian was undeterred and maintained her rapid pace on each successive restart. Lapped traffic nearly unhinged her race on lap 14, but she followed by running her fastest lap of the main on lap 15.

She kept up the momentum to the checkered flag for a 2.3 second victory over the 15 car field. Her busy 2019 season continues next weekend with the Outlaw Nationals at Keller Auto Raceway. Racing will take place on both Friday and Saturday nights.

Jade would like to thank her sponsors CMT, Xtreme Products, Driven Performance, Garlock Collision, and Impact for their support.