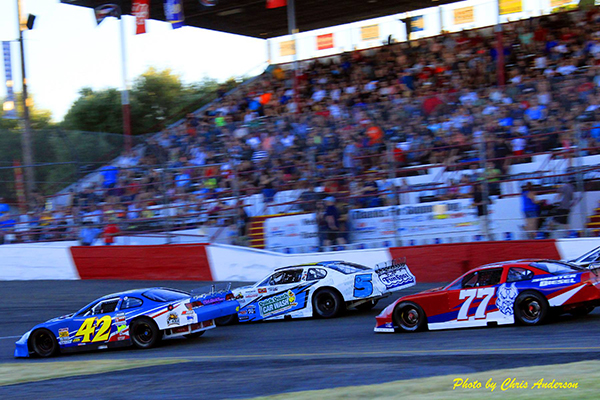 ROSEVILLE, CALIFORNIA (December 24, 2018) – The 2019 season at All American Speedway will mark the first full championship year under the guidance of Bill McAnally Racing Promotions. In an effort to attract strong car counts, Bill McAnally has announced a variety of contingency prizes and bonus incentives for the speedway’s competitors. This year will also mark a return of NASCAR Home Tracks sanctioning to the track located @The Grounds in Roseville, CA.

Awards will be reserved only for drivers who compete full-time at the one-third mile oval in 2019. One major prize leads the list; Late Model and Limited Modified drivers will be entered for a test in a BMR-prepared Toyota Camry in the NASCAR K&N Pro Series, West with the opportunity to compete in the West race on October 12th at the track.

Full-time Late Model, Jr. Late Model, Limited Modified, and Super Stock drivers will be entered into drawings for trips such as the Phoenix NASCAR Cup Series weekend in November 2019, the Daytona Speedweeks in 2020, and trips to the 2019 NASCAR Awards Banquet in Las Vegas and the 2019 NASCAR Touring Awards Banquet in Charlotte. A GM Performance 602 Crate Engine will also be given away while Late Model and Jr. Late Model drivers will be eligible for a complete Five Star Body award as well.

All American Speedway has partnered with many of its track sponsors to create sponsorship package giveaways for the 2020 season. Late Model, Jr. Late Model, and Limited Modified drivers will be eligible for a drawing for a $2,500 sponsorship, while Limited Modifieds and Super Stocks will have a $1,500 sponsorship drawing. Super Stocks, Mini Cups/Bandoleros, and F4s will have an additional $1,000 sponsorship drawing. Full-time entries in the F4 class will receive a free pit pass for each consecutive race they compete in throughout 2019 to help ease their costs to compete.

Kevin Harvick Management will offer $700 in cash contingency bonuses each night across the Late Model, Jr. Late Model, Limited Modified, and Super Stock divisions. The cash will go to the fourth place driver (or next eligible full-time driver) at the halfway and the finish of each race.

The 2019 All American Speedway schedule begins with Open Practices on March 23 and March 30, before a tech day on April 6 and the season opener on April 13. SPEARS SRL Southwest Tour cars will join the night of NASCAR action for one of the biggest season openers in many years at the track. Weekly track championship battles will run until November 2nd with the Championship Awards Gala rounding out festivities on November 23rd.

Stay tuned to www.AllAmericanSpeedway.com for more information on tickets, rules, and purses for the 2019 season. More information can be found by calling the track info line at (916) 786-2025. The All American Speedway is located at 800 All America City Blvd in Roseville, CA. 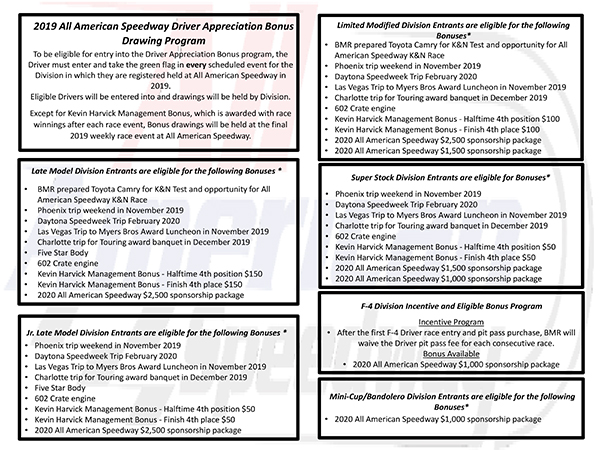