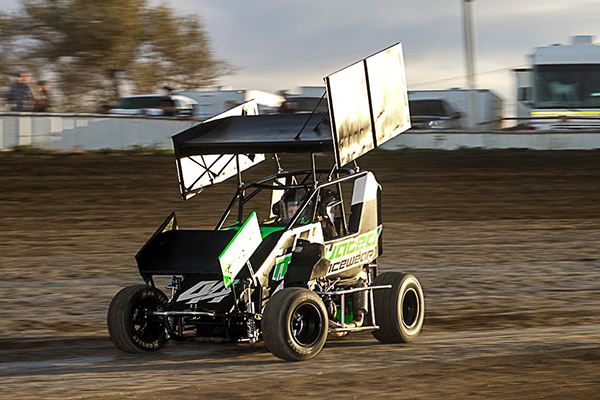 BRENTWOOD, CALIFORNIA (November 7, 2018) – Fresh off of a win and a third place in the Dixon Speedway championship, Jeffrey Pahule, Jr. charged into the speedway last weekend for the 6th Annual Lonnie Kaiser Memorial looking to add to his successful season. Pahule drives the #44x for Teletech Communications and Motivated Racewear in Restricted 600cc Micro Sprints.

Friday night’s activities included qualifying and heat races. Pahule opened up the program with a third place effort in hot laps before he improved both his time and position in time trials. He timed in second quickest with a sizzling 10.914 second lap against the 15 cars that took times.

He started his heat race from fourth, but was up to second on the opening lap. He took the lead on lap four and ran another 10.9 second lap on lap seven. He darted away to a three second advantage at the end of the ten lap contest.

Saturday night saw things begin with another round of hot laps where Pahule was fourth before recording a third place finish in the six car, six lap dash.

Pahule started the feature from third and battled briefly with Jade Avedisian for that spot before the first caution fell. When things continued, he managed to drive away solidly with the position. A red flag around the halfway mark gave Pahule a shot at second place against Ricky Sanders, a driver he has battled with numerous times in the last couple of weeks. Pahule ended up spinning trying to go underneath him in turn one, which brought out a caution.

The young driver was able to advance forward much over the final 10 laps, settling for a hard-earned tenth place finish.

The 2018 season concludes on November 16-17 with the Turkey Night at Keller Auto Raceway at Plaza Park in Visalia. Pahule finished seventh at the speedway during the 2018 California Speedweek and third in the Mark Hagopian Memorial.