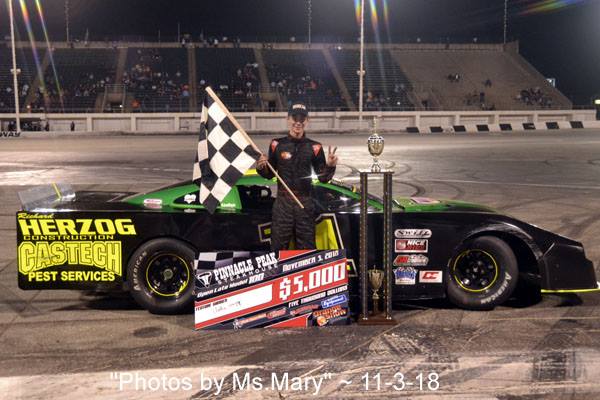 Herzog drives the #11 Richard Herzog Construction, Superior Door & Frame #11 that he campaigns at Madera Speedway in the RPM Mortgage Pro Late Model Series as well. He finished the 2018 season at Madera in the runner-up spot in the championship on the strength of five top-five finishes.

He opened up the weekend by leading Friday practice on the quarter-mile oval in San Bernardino, CA, then he led qualifying for his sixth fast-time of the year. He lined up fifth for the 100 lap contest with 17 Open Late Models competing. Herzog used a series of cautions early in the race to methodically work his way to the front, taking the lead on lap 35.

A caution flew with 27 laps to go but Herzog did not relax his pace, charging to his best lap of the main event on lap 88. He eventually accumulated a 3.9 second lead for a straightaway advantage on second place at the finish line. The finish improves on his second place run in the Greg Ross Memorial 57 at the speedway back in May as well.

“You know I love this track. I’ve always enjoyed it since the first time I was here,” Herzog said in victory lane live on Low Budget TV. “I feel like it really fits my driving style. I can’t thank my crew, my dad, and all that sponsors that got this car here enough and now we’re on to Vegas.”

Herzog is aiming to make his second career SPEARS SRL Southwest Tour start on November 17th when he rejoins the series at the Bullring at Las Vegas Motor Speedway. Herzog competed at the Bullring in October in the Fall Classic for Super Late Models, grabbing quick time in the $15,000 to win event before crossing the stripe second. The finish was nullified by a post-race infraction, but the team soldiered on to Bakersfield the following week for the October Classic for his SRL debut. Herzog overcame mechanical troubles in qualifying to drive from the back of the field for a solid sixth place finish. He will look to build on both of those runs in the “West Coast Short Track Championships” which will be televised live on Lucas Oil Racing TV and aired on MAVTV at a later date.

Potential sponsors are encouraged to contact info@austinherzog.com for more information.