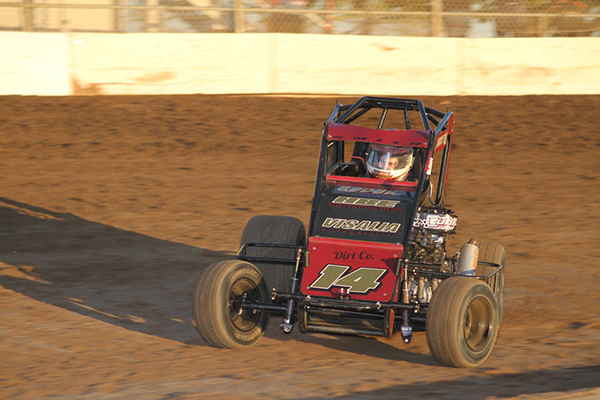 Smith’s weekend opened in shambles on Friday night with a flip in his heat race and a tire rub forcing a DNF in his qualifier. Undeterred, he drove from ninth to second in his B Main to earn the 20th starting position for the 40 lap feature.

Brandon Carey won the $500 Panella Trucking pole shuffle to earn the top spot for the feature. Micro Sprint Mart high point earner Dalton Hill started second and led the opening lap, however. The red flag flew on the second lap when Mike Ludwig flipped in turn four. Dan Mognaga tried to use the bottom to get around Hill but couldn’t get the move done on the restart.

Shawn Laeber spun trying to grab fifth from Ryan Delisle in turn three and nearly collected Smith, who had driven from 20th to eighth by that stage. The restart on lap 14 allowed Smith to crack the top-five.

Brandon Carey, Ben Worth, and Smith battled nicely for third before Smith took the spot by lap 19. Smith then gobbled up second from Mognaga on lap 25, using the cushion to set his sights on Hill.

Smith completed the Turkey Bowl feast by taking the lead on lap 29 with still 11 laps remaining. A caution on lap 39 involved Joe Silva and Angelina Dempsey on the backstretch. Smith completed the drive of a lifetime as he held off Hill over a one lap shootout for his first career $2000 Turkey Bowl win with Worth, Carey, and Mognaga the top-five.

High point earner and $500 pole shuffle winner Brad Hannum charged ahead by five car lengths at the start of the Super 600 feature. Eighth starting Ryan Reeves, the 2017 California Speedweek champ, had a few close calls early in the feature that dropped him back to tenth.

On lap ten, Alex Panella hit the backstretch wall but he was able to escape to the infield to allow the race to stay green. Lapped traffic by lap 12 allowed Ben Worth to look inside Hannum for the lead. Worth then tried the outside but couldn’t complete the pass on lap 14.

The top four ended up nearly nose to tail in lapped traffic by lap 19. Worth and Christensen cleared Hannum in turn three to drop him back to third on lap 20. Hannum’s car went up in smoke for a red flag on the following lap for a heart breaking end to a dominating weekend. Keith Day, Jr. surrendered sixth on the restart with mechanical issues of his own.

Worth persevered through lapped traffic in the closing stages to get his first Turkey Bowl with the $2,000 Super 600 win. Cody Christensen and 2014 track champion Travis Labat made up a strong podium. Raio Salmon and TJ Smith rounded out the top-five. Blake Bower won the Salmon Motorsports Hard Charger driving from 17th to tenth.

Restricted’s Turkey Bowl had perhaps the most carnage and excitement on Saturday night, but the 2018 track champion Caeden Steele rose above for his second consecutive win. The initial attempt at a start saw the field jockeying around down the front stretch with Ashyln Rodriguez ending up spun around backwards to force a complete restart.

High point earner and pole sitter Gauge Garcia tangled with Katey Syra on the next restart with Garcia flying through the air. Garcia and Syra were eliminated while Reilee Phillips from the 12th starting position was also involved but was able to continue on.

Jarrett Rogers slowed for another caution while Isabel Barnes had to restart from the lead minus a front wing on the car. Barnes managed to roll the top to keep her momentum up and maintain the lead for several laps.

Steele started eighth and worked his way up to third, then criss-crossed with Brody Petrie for second. On lap six, Steele went two-for-one in turn two to take the lead from Barnes.

Dylan Bloomfield tumbled in turn two for a red flag on lap 11 and he was uninjured. Caden Stoll emerged from the restart in third after starting seventh, but faced some challenges from Oregon’s Austin Torgerson before another caution on lap 18.

A four car melee from positions 12-15 included Wyatt Bookout going up in flames in turn one. Steele had to jump all four wheels over the inside berm to avoid the spinning cars and keep his lead position. Joshua Rogers was knocked out of the race by the incident as well.

Torgerson and Stoll continued the duel for third coming out of the red flag. Torgerson’s run ended when dove underneath the berm in turn one on lap 25, spinning and nearly collecting Stoll.

Caleb Debem led points after Friday action and led lap one of Junior Sprints before Jonathan Andrichuk spun in turn four to force a complete restart. Andrichuk spun again in turn four and collected Mason Smith for a caution on lap one. 2018 track champion Dalton Parreira hounded Debem for the lead before surrendering second to Colton Key.

Action continued when Ty Lovenburg flipped in turn four for a red flag on lap seven. Parreira took second position back from Key on the restart. Hayden Stepps made hard contact with Key as she was being lapped on lap 13, bringing out a red flag.

Parreira used the restart to finally take over the top spot from Debem on lap 17. A late caution period set up a wild finish where Debem slid in turn four, allowing both Washington’s Jayden Whitney and Lucas Mauldin to sneak past for second and third position at the checkered flag. Parreira took the $750 victory with Cash Lovenburg and C&P Promotions Hard Charger TK O’Brien rounding out the top-five.

For more information on Delta Speedway presented by Financial Center Credit Union, follow us online at www.deltaspeedwaystockton.com or on Facebook, Twitter, and Instagram. 2018 Championship Awards Banquet and 2019 Schedule information will be announced in the coming weeks.

Posted in Delta Speedway
← HILL AND HANNUM AMONG HIGH POINT EARNERS AFTER NIGHT 1 OF TURKEY BOWLDAVEY HAMILTON, JR. READYING FOR KING OF THE WING AT IRWINDALE, KERN →