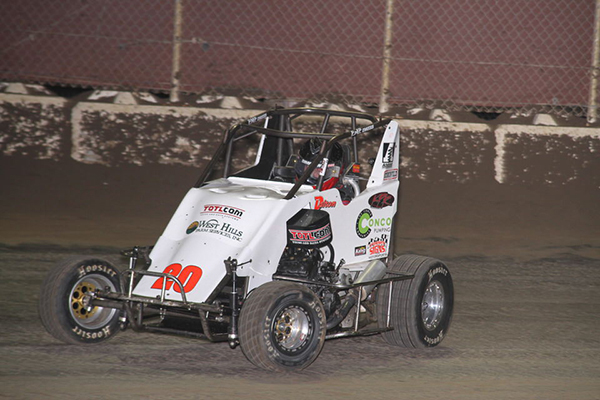 Friday action saw 43 Non Wing Micro Sprints on hand for the heat race and qualifier action. Finishing positions and passing points were used to set the starting lineups for the Saturday features. Hill drew a 53 pill to start eighth in heat race five. He charged to the front, finishing fourth and grabbing 20 passing points in the process.

He emerged from the heat races as the high point earner, which lined him up fourth after the inversion in the first 15 lap qualifier. Hill’s qualifier included multiple race winners and champions in the field but he was undeterred, using the inside line to jump into second by lap three. A caution closed down the gap to the leader. He used a bobble by the top car in turn two to sneak underneath and take the lead on lap seven. With the qualifier win, Hill earned the highest points of the night for $100 courtesy of Micro Sprint Mart.

The top-six drivers battled in the $500 to win Panella Trucking Pole Shuffle. As high point car, Hill was guaranteed to start on the front row of the feature. He battled hard with Brandon Carey in the final round of the shuffle, missing the win by just a few feet at the finish.

Starting second in the 40 lap feature, Hill immediately swept past Carey to take the lead. He held the lead through several restarts and lapped traffic until 20th starting Tyler “TJ” Smith grabbed the top spot on lap 29.

Hill fell back by a few car lengths as the car got tight but the advantage was nullified by a lap 39 caution. Hill had a one lap shot to try to take the win away from Smith but was unable to do so, rounding out a strong weekend by crossing the stripe in second place.

“It was a really good weekend and kind of hard to complain,” Hill said. “Go high point one night. Run up front all night and finish second to who I think is the best micro sprint driver in the country. When you come home second to Tyler Smith, it’s like ‘What are you going to do?’”

“A big thanks to Stan Yockey for all his support this weekend and over the years. His advise and expertise is always a big help!”

Race fans can keep up on all of the action for Dalton Hill Racing on Facebook or by visiting www.DaltonHillRacing.com