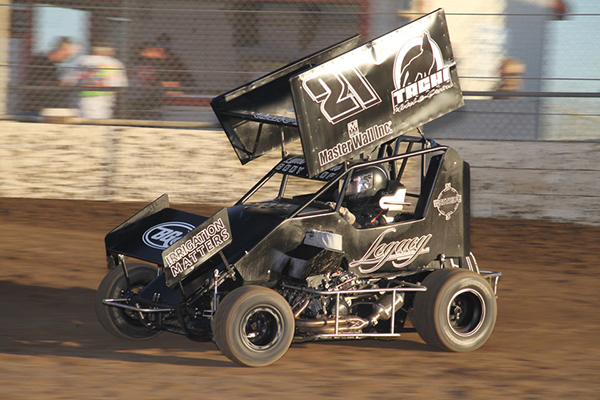 STOCKTON, CALIFORNIA (October 26, 2018) – The opening night of Turkey Bowl XVIII presented by Jason Bright Racing brought out 117 race cars jockeying through heat races and qualifiers. A fast paced track at Delta Speedway presented by Financial Center Credit Union saw Dalton Hill and Brad Hannum among those emerging as top points earners for the night. Non Wing featured the most drama with the top-two in 2018 points, Tyler “TJ” Smith and Caden Sarale, each experiencing incidents that will drop them into Saturday’s B Mains.

The Turkey Bowl format features no qualifying, with just heat races, qualifier races, and passing points setting the top 16 for each division’s feature. The balances of the fields are seeded into 15 lap B Mains.

The pressure translated to lots of aggressive racing early in the Non Wing heat races with CJ Bunch and Ben Worth dropping out at the start of heat race #1. Smith started from the rear after pill draw and flipped hard in turn three for a red flag, with Sarale also eliminated from the race in the melee. On the ensuing restart, Nate “Gator” Wait flipped as well. Pole sitter Brody Fuson held on for the win over Shawn Laeber. The following heat race started poorly as well with Ryan Delisle flipping on the front stretch but he was able to restart from the back after a short red flag.

The first 15 lap Non Wing qualifier included Worth, Smith, and Sarale coming from the back and great action followed. Nick Robfogel and Smith made contact in turn one for a caution. Smith developed a tire rub and did not finish the race in an unfortunate evening for the track champion.

Dalton Hill took over the lead after starting fourth and used that charge to lead the points into Saturday night. Ryan Fernandes slid across the field from the pole at the start of the second qualifier, resulting in Tyson Davis and Harlee Aguilera crashing hard for a red flag.

The race went green from there with Ryan Delisle getting the win ahead of Fernandes. Chad Laughton had a big flip at the start of the fourth qualifier with Brandon Carey taking that checkered flag after 15 laps of racing. Qualifiers were also won by Brody Fuson and Dan Mognaga. The top six in points will duel for the $500 to win, Panella Trucking pole shuffle before the 40 lap, $2000 to win Turkey Bowl feature.

Super 600 on the other hand was more fast paced during both the heat races and qualifiers.

The Super 600 first qualifier was another quick affair with 2017 CA Speedweek champion Ryan Reeves getting the win. Keith Day, Jr. spun around backwards on the start of the second qualifier and had to restart from the rear. 2017 champion Jake Andreotti took advantage to drive away for the victory while Brandon Carey drove from seventh to fourth for crucial passing points. TJ Smith turned around the bad luck he suffered in Non Wing by winning the Super 600 third qualifier. CoCo Carver’s flip in turn one stopped the action at the start of the final qualifier. Raio Salmon proceeded to motor away for the win as the race went non-stop for the final 15 laps.

Super 600 will also stage a six car pole shuffle for $500 to win on Saturday night.
Ashlyn Rodriguez got sideways and tipped up on her side for a red flag on the second lap of the first Restricted heat race. Gauge Garcia drove to a big lead ahead of Dylan Bloomfield to win the heat race. 2018 champion Caeden Steele tried high and low to get around former Jr. Sprint champion Isabel Barnes but Barnes held on for the second heat race win. Brian Gilbert won the third heat while Reilee Phillips won by a straightaway in the fourth heat race.

Brody Petrie won the first Restricted 15 lap qualifier and Jeffrey Pahule led all 15 laps for the second qualifier win. Jarrett Rogers held off Dylan Bloomfield over the course of all 15 laps for the third qualifier victory. An engine failure for Rylee Whitehouse slowed the fourth qualifier on lap one. Katey Syra used the restart to rocket from fourth up to second but could not reel in Caden Stoll in time as Stoll took the victory.

Dalton Hill will carry a 15 point lead over Koen Shaw in Non Wing with TJ Smith a distant 34th while Caden Sarale is 21st in the standings. Brad Hannum leads Super 600 by 10 markers over Cody Christensen with Blake Bower missing the top 16 to lock into the A feature by just one point. Caleb Debem’s strong night in Jr. Sprints gives him a 15 point cushion over Dalton Parreira while Gauge Garcia has a narrow two point lead over Katey Syra. Washington’s Becca Clark was the 17th place Restricted car to earn the pole for the B feature.

Nearly $20,000 in cash and prizes will be awarded during the Saturday finale of Turkey Bowl XVIII. Drivers meeting begins at 4:30 p.m. with hot laps to follow. The first B Mains are expected to begin by 6:00 p.m.