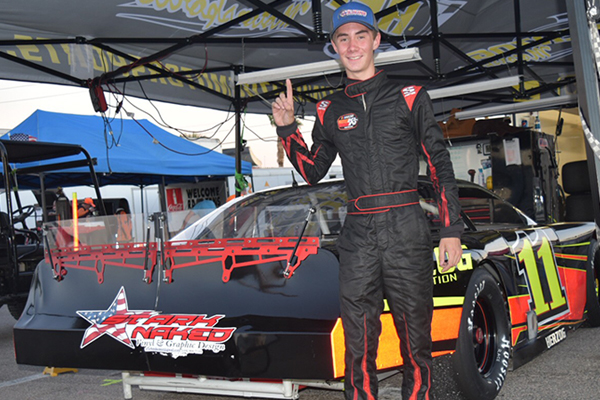 CLOVIS, CALIFORNIA (October 23, 2018) – Austin Herzog will try to ride a wave of momentum into Bakersfield as the 16 year-old driver makes his debut in the SPEARS SRL Southwest Tour on Sunday afternoon. Herzog will be competing in the revival of the October Classic during the Bulwark FR 175 at Kern County Raceway Park.

Herzog returns for his second appearance aboard the #11 Richard Herzog Construction VanDoorn Chassis, with Crew Chief Charlie Wilson. The machine debuted during the $15,000 to win Senator’s Cup at Las Vegas last weekend where Herzog set quick time in qualifying. He finished the 150 lap feature in second place by mere inches at the stripe. Herzog was disqualified in post race inspection for coming in high on left side weight, but the young driver still made a great impression that he hopes to build upon in Bakersfield.

Activities get underway Saturday with three practice sessions and single car qualifying. Sunday includes an on track autograph session and Trick or Treat at 12:45 p.m. with the Bulwark FR 175 expected to begin around 2 p.m. Teams will have option to change tires throughout the event, making it a great preview for the upcoming 2019 Winter Showdown. Tickets are available by visiting www.KernRaceway.com