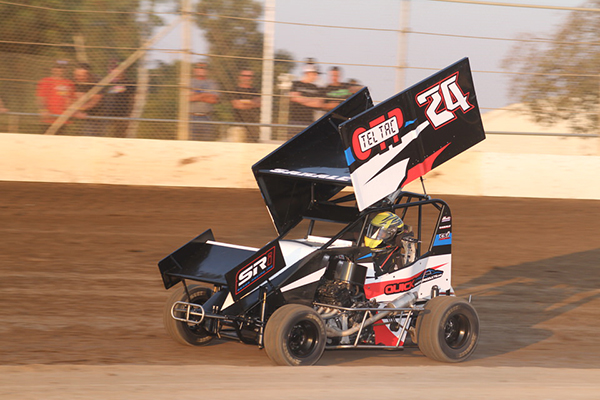 Sarale led a Super 600 qualifying session where 17 cars ran 9 second laps. He started fourth in the 30 lap, $500 to win feature after the inversion was spun by the fans in the stands.

CoCo Carver led the 20 car field to green, leading the first three laps before the first caution. The caution fell for Alex Panella slowing in turn four, surrendering seventh position. He restarted from the back of the field.

Points leader Nikko Panella battled hard with Brad Hannum for fourth before he took the spot on lap six. Meanwhile Sarale, the August 18th winner, hounded Carver for the lead. The top-four cars ran on top of each other with Carver bouncing off a hole in turn four on consecutive laps. Sarale seized the lead with a strong outside maneuver in turn four to lead lap ten.

Lapped traffic on lap 12 brought Carver back into the mix before a wild battle ended his night. Carver and Michael Laughton made contact heading into turn three, while Hannum tried to dive low underneath them on the berm. Hannum collected one of the restart cones while Laughton and Carver grinded up into the turn four wall to end both of their evenings. Hannum drove away and was able to restart third.

Sarale maintained the lead over Panella before lapped traffic undid Panella’s run with a spin in turn one on lap 21. The restart was dynamic for both Panellas, as Alex used the outside line to advance all the way to fifth while Nikko advanced as well. Sarale claimed his second career Super 600 victory ahead of Hannum, 2014 champion Travis Labat, Blake Bower, and Alex Panella. Second in points Raio Salmon was seventh while Nikko finished tenth. The championship battle in Super 600 now stands unofficially at a single digit margin heading into the final race.

Dan Mognaga earned his third Delta Speedway win of 2018 and first since sweeping the Summer Sizzler in June by taking the $500 Non Wing main event. Robbie Lewis led the first 13 laps before Mognaga made a three-wide move in lapped traffic to take over. Second in points and fast-time qualifier Caden Sarale fell out with mechanical issues not long after.

Lewis fell into the clutches of points leader Tyler “TJ” Smith and the duo entertained with Smith finally winning the long battle for second on lap 27. Mognaga charged to victory over Smith, Lewis, Ryan Delisle, and Blake McGourty.

Discovery Bay’s Dylan Bloomfield led wire-to-wire for his fourth Restricted win of the season. The 27 car turnout was narrowed to 20 cars for the 25 lap, $300 to win feature. An exciting start saw fourth starting Devon Courtnier bounce off the berm in turn two and slip back deeper in the order.

A pair of big crashes slowed the action. Dual at Delta Saturday winner Logan Trevino hit the wall head on in turn three for a red flag on lap three. Mathew Tatoole suffered top wing and front wing damage in the skirmish as well. Trevino was uninjured. Jeffrey Pahule spun in the infield in turn two on lap eight, and Hailey Wood flipped over the top of Sage Bordenave in avoidance. She was uninjured as well.

Caleb Debem of Prunedale led all 20 laps of the Jr. Sprints for his first win at the speedway since May 19th. The leaders went three-wide in lapped traffic on several occasions. Six-time winner and points leader Dalton Parreira tried several attempts to get inside Debem but had to settle for second. Austin Wood, TK O’Brien, and Kyle Fernandez rounded out the top-five.

The finale for the $1000 championships is next up on October 6th, where the King of California championships will also be crowned.