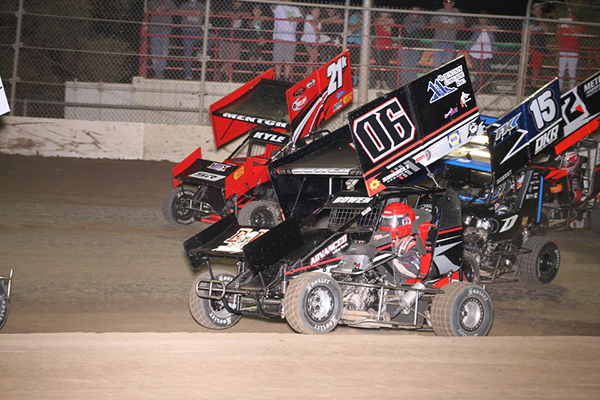 STOCKTON, CALIFORNIA (September 11, 2018) – The penultimate night of championship racing at Delta Speedway presented by Financial Center Credit Union is this Saturday night with drivers closing ever closer on the $1000 track championships. Super 600, Non-Wing, Restricted, and Jr. Sprints compete on the 1/7th mile dirt oval at the San Joaquin County Fairgrounds.

Super 600 has presented an electric points battle all year long between Stockton’s Nikko Panella and Fresno’s Raio Salmon. Panella won Sunday September 2nd’s Dual at Delta feature for his first career Super 600 win, worth $500. The former Delta and California Speedweek champion now leads Salmon by 16 points in the series. Salmon has three wins at Delta and has added three wins at Lemoore Raceway including last Saturday’s King of California round. 2014 champion Travis Labat, 2015 Restricted champion Caden Sarale of Stockton, and Alex Panella round out the top-five.

Tyler “TJ” Smith leads Sarale in the Non-Wing competition with a 33 point advantage. Smith had a brilliant weekend during the Dual with a win and a second place finish while Sarale had a second place finish of his own as well. The rest of the top-five are well behind but in their own points battle with Dan Mognaga leading Brent Brooks by 38 points. Angelina Dempsey had a career-best fourth place finish during the Dual to advance to fifth in the championship. 30 laps and $500 are on the line on Saturday.

Restricted points leader Caeden Steele had a mixed weekend during the Dual, grabbing a win but also settling for a 13th place effort as well. His lead over Caden Stoll is down to 15 points with Dylan Bloomfield in third. Devon Courtnier and Ashlyn Rodriguez round out the top-five. 25 laps and a minimum of $300 to win are offered for the Restricted division.

The youngest drivers in the Jr. Sprints saw their 20 lap features during the Dual split by the top-two in the points. Dalton Parreira won his sixth Delta race on the year while Austin Wood won his second Delta main event of the season. Parreira leads Wood by 42 points. Caleb Debem is solidly third followed by Selena Little and Colton Key.