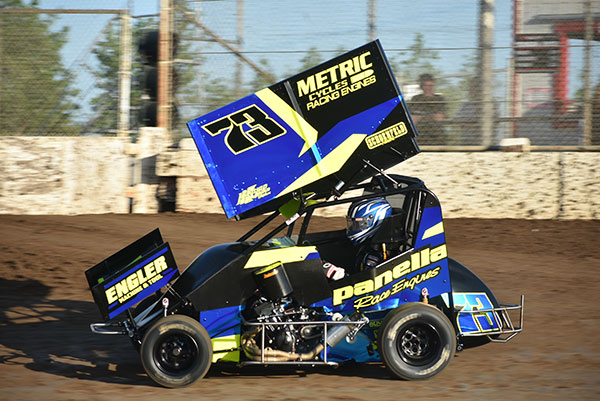 Panella set the standard early with a sizzling 9.696 in time trials and started the 30 lap feature on the pole after a zero inversion was spun. Panella led the opening lap before a caution for Hayden Saich and Adam Kaeding tangled up in turn one.

2014 champion Travis Labat stuck his nose inside Panella on the restart but Panella held his ground. Meanwhile, double-duty racer Caden Sarale of Stockton was using the bottom line with Raio Salmon following him as they battled with 2017 champion Jake Andreotti for fourth.

Andreotti went downstairs with Sarale adjusting accordingly to pass him on the outside on lap six. Labat attempted to go side-by-side with Panella for the lead in lapped traffic on lap eight before the caution flew for his brother Alex, the B-Main winner, stopped in turn four. Sarale continued his march forward as he tried to pass Saturday winner Keith Day, Jr. for third on the restart.

Kyle Mentch spun down the backstretch for the next caution on lap 13. Saich slowed again for the final caution of the race on lap 19. Sarale tried diligently to make the outside work on the final run to the finish and fell back to seventh position.

Panella navigated a challenging turns three and four cushion to take the victory ahead of Labat and Day. Andreotti topped Salmon in a back-and-forth battle for fourth as well. Panella unofficially has taken over the points lead from Salmon with two points races remaining.

Tyler “TJ” Smith avenged a runner-up performance on Saturday to pick up Sunday’s $500 Non Wing win. Smith took over the lead by the second lap of the race but faced an onslaught of challenges from there on out in the 30 lapper.

Stone seized his chance, finally completing a slidejob for the lead on lap 18. Smith promptly took the lead right back into turn one. Caden Sarale took over second on lap 21 and took up the fight to Smith. Several slidejob attempts were unsuccessful and Smith held on for the .780 second victory with JJ Bright third over Angelina Dempsey and Stone.

Restricted championship contender Caeden Steele earned his first Delta win since August 4th in dominating fashion. The 25 lap, $300 to win event started with Steele leading from the pole position. Tulsa Shootout winner Corey Day was in pursuit while the rest of the pack was bottled up behind them side-by-side for third.

Caden Stoll started fifth and started to challenge Jade Avedisian for third on lap six. Lapped traffic became a factor by lap ten but Steele managed to stretch out his lead by putting three lapped cars between himself and Day. Former Jr. Sprint champion Isabel Barnes slowed in turn two to bring out a caution on lap 13.

Avedisian and Stoll continued their fight for third on the restart with Jade using the outside line to maintain the position. Meanwhile Ashlyn Rodriguez ran up to fifth. An incident involving the turn three cone required the final caution with three laps to go. Steele was undeterred in taking the win over Day, while Avedisian outlasted Stoll for a strong third place finish. Rodriguez rounded out the top-five.

Dalton Parreira led the final 15 laps of the Jr. Sprints feature for his sixth win of the year, worth $200. Caleb Debem jumped out to the early lead while pole sitting Colton Key drifted back to fifth by the second lap. Key then got sideways in turn two and fell back a few additional positions. The field bottled up around Key and then the red flag flew on the next set of corners. Andrew Hintz and Selena Little were involved in the incident.

When things continued, Saturday winner Austin Wood and Debem tangled in turn three for the lead with Wood going up over the top of Debem. Wood was penalized two positions for his involvement and forced to restart from third. The incident thrust TK O’Brien into the lead and he led lap five before also tangling with Wood in turn two for a caution. The yellow flew again two laps later with Debem and Wood already back up to third and fourth by that point.

Parreira cruised over the rest of the race distance with Wood advancing up to second and Debem charging to third. Peyton Whitehouse was fourth followed by O’Brien.