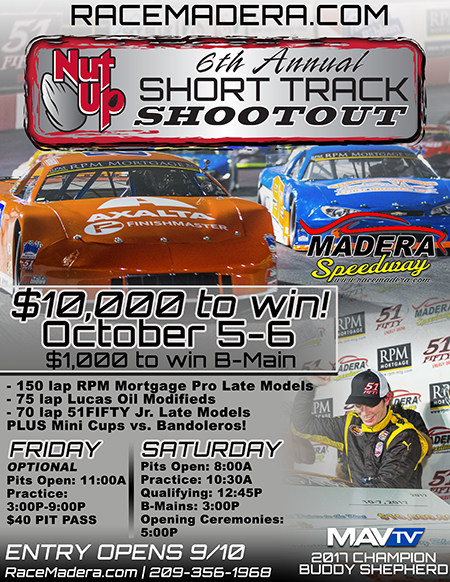 The event is fully televised by MAVTV including the 75 lap Lucas Oil Modified Series, 70 lap 51FIFTY Energy Drink Jr. Late Model Series, and 20 lap Mini Cup vs. Bandolero races as well. $1,000 will be offered to win the Late Model B-Main event as part of the lucrative prize pool.

Activities will begin Friday night with optional practice sessions. Pit gates will swing open at 11:00 a.m. with practices beginning at 3 p.m. for all four divisions. The only fee is $40 per pit pass on Friday. The track will go dark at 9 p.m. Saturday’s program will begin bright and early at 8 a.m. with practices starting at 10:30 a.m.

Time trials will take place at 12:45 p.m. before the first part of the racing action at 3 p.m. Racing will include the Late Model C-Main and B-Main along with the Lucas Oil Modifieds B-Main (if necessary) and the Mini Cup vs. Bandolero feature. Times are subject to change.

Opening ceremonies are at 5 p.m. with the full lineup of features to follow. All told, over 400 laps of racing for over 100 race cars is scheduled on the one-third mile asphalt oval.

Tickets for Madera’s biggest race of the year are value priced at just $15 for adults, $13 for seniors and military, $7 for youth ages 6-12, and kids five and under are free!

Madera Racing on MAVTV airs every Thursday at 5 p.m. and 8 p.m. PST and is also available on the Lucas Oil Racing TV app. The fourth round of the 2018 51FIFTY Energy Drink Jr. Late Model Series airs next September 13th.