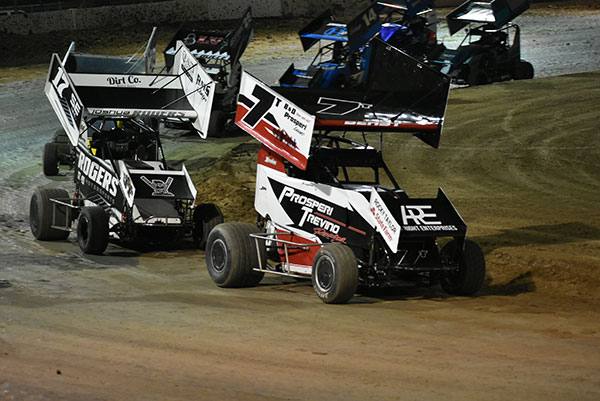 Carey, the 2016 double champion in both Super 600 and Non Wing, won last year’s Turkey Bowl for Super 600 as his last trip to the winner’s circle. The Non-Wing feature for 30 laps opened with a spectacular set of circumstances. Third starting Brody Fuson of Bakersfield had a mix-up at the front of the field that damaged the car enough to end his evening, while meanwhile a spin mid-pack involving Stockton’s Brent Brooks on the backstretch sent a shockwave through the field. Seven cars were eliminated from the race as they piled in, including most of the B Main transfers along with Summer Sizzler sweeper Dan Mognaga of French Camp.

Carey took over the lead on the restart before a spin on lap three involving Jacob Williams and Robbie Lewis in turn two.

2018 points leader Tyler Smith clawed towards Carey on the restart as the duo ran nose to tail on lap seven. Smith and Carey put on a driving clinic as they darted in and out of lapped traffic, banging the cushion before a caution on lap 23 for Eathon Lanfri spinning on the backstretch. Austin Stone and Caden Sarale entertained with a criss-cross battle for fourth on the restart. Ripon’s Randy Sims steered from 21st to seventh avoiding the action.

Smith hounded Carey over the final laps, hesitating to make a move when Carey stumbled a bit in turn four on the white flag lap. On the final lap, Smith took his shot with a big slidejob maneuver into turn three. Carey reacted well, slowing for a crossover to take the checkered flag first. JJ Bright was third followed by Stone and Sarale.

Day led the opening lap of the Super 600 feature driving the #7 PMP house car. CoCo Carver showed his nose early but faded back by five car lengths by lap three. Incoming points leader Raio Salmon immediately went to work from her signature bottom line and was one of the few cars to do that early the feature. She ended up in a three wide battle with 2017 champion Jake Andreotti and Caden Sarale with Andreotti winning the battle for fourth.

Salmon ended up passing Sarale for fifth on lap ten while Andreotti and Panella tried to claw towards Carver. Wingless winner Brandon Carey rolled the top to swoop past Salmon and knock her back as far as seventh on lap 14.

Andreotti dove inside Day on lap 21 for the lead in lapped traffic and tried again down the backstretch. Day led lap 23 by a nose before Andreotti edged forward coming to complete lap 24. Andreotti slid across into Nikko Panella in turn four and the caution waved for the front wing debris off of Panella. The caution placed Day back into the lead with seven to go. Blake Bower spun across turn two and hit the inside berm to go airborne for a caution on lap 25.

Androetti hit the turn two cushion hard on the following restart and faced a challenge from Panella for second. Their furious battle was halted for a caution for John Bordenave spinning in turn four.

Panella had a shot at Day on the final restart but Day motored away for the victory. Panella, Andreotti, Salmon, and Carver made up the top-five.

Austin Wood jumped out to the Jr. Sprint lead from the pole with points leader Dalton Parreira in pursuit. Parreira and Caleb Debem had a close battle down the backstretch but they managed to continue on. TK O’Brien flipped in his heat race and had a narrow missl in the main when he nearly spun in turn two and the field managed to avoid him.

The top-three ran virtually nose-to-tail as the race reached halfway of its 20 lap distance. Lapped traffic on lap 11 brought the trio together with Parreira choosing to go outside of traffic to take it three-wide but Wood kept the lead.

A lap 18 caution closed the pack up again but Wood hung tough for his second consecutive victory while Debem snookered Parreira for second. Colton Key and O’Brien made up the balance of the top-five.

Logan Trevino led all 25 laps for his first career Delta Speedway Restricted feature as well worth $300. Trevino led the opening lap of the feature before red flags were waving when Nate Matherly and points leader Caeden Steele got together in turn four. Both drivers continued on.

Trevino encountered lapped traffic on lap eight and found the pickings to be tough but still maintained a five car length advantage over August 18th winner Gauge Garcia. Garcia was playing both offense and defense as Corey Day looked inside of him to take second at halfway at lap 12. Garcia and Day engaged in a back-and-forth duel which allowed Trevino to stay at the front. Matherly spun in front of the leaders while the lapped car of Drew Mowry stopped in avoidance, forcing a caution on lap 12.

Trevino charged ahead over the final 13 laps for his first Delta Restricted win while Garcia persevered over a great battle with Day to grab second place. Devon Courtnier and Dylan Bloomfield rounded out the top-five.

Delta Speedway continues September 2nd with the second half of the Dual at Delta.