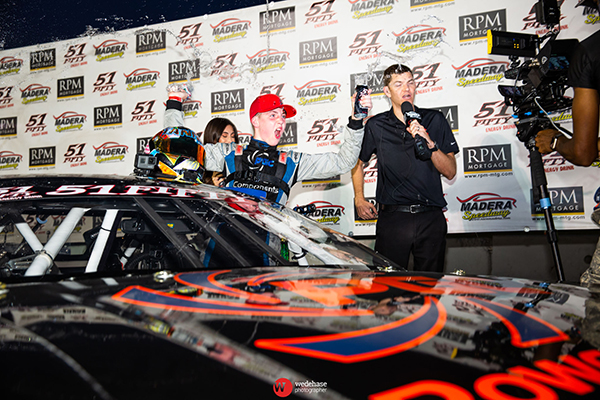 For Vernon, the $2,000 win avenged a two year stretch full of ups and downs in the tough series. Incoming points leader Austin Herzog, 16, earned fast-time before drawing fourth in the redraw. Napa’s Logan Zampa won the pole and led the first four laps of the event. Vernon started third after qualifying fifth and nosed inside Zampa to take the lead on lap five.

The first caution flew on lap nine when double-duty racer Kayla Eshleman spun in turn two. Ross Strmiska used the restart take over second from Zampa on lap 11. Herzog followed suit moving into third on lap 15, with both passes made on the outside.

Herzog looked poised to dash to the front before a rear end failure brought his car to a halt at the top of turn two for a lap 15 caution. This played to the favor of 2016 champion Matt Erickson, who entered the night second in points but started a dismal 11th.

Leading rookie Adam Lemke of Hollister rolled the bottom to grab third from Strmiska and brought his teammate 13 year-old Jesse Love with him. Love, with eight career Jr. Late Model wins, is the youngest starter in series history.

Lemke then took over second from Zampa on lap 22. Lapped traffic tightened up the top-five cars on lap 33 before a caution when Jason Aguirre and JJ Ferguson bounced off the front stretch wall with heavy damage.

The caution flew again on lap 35 when Nick Grossi slowed with apparent issues in the rear end as well. Lemke closed down on Vernon for the lead coming into the lap 50 break with Zampa third ahead of Strmiska and Love.

Vernon slid sideways on the restart but maintained the lead making for a wild two-by-two battle behind him. Both Strmiska and Erickson attempted to swoop past Love on the outside while Lemke and Zampa continued to duel. The caution waved on lap 55 and Love took over third from Lemke on the restart.

Dillon Tucker briefly looked outside Lemke for fourth as well. Tucker had driven from 13th to fifth before he too suffered mechanical issues that derailed his evening.

Zampa and Love closed down on Vernon in lapped traffic on lap 61 before he managed to pull away again. Racin Vernon pulled away for the win with Zampa holding off a great battle with Love for second. Erickson unofficial took over the points lead by finishing fourth while Strmiska was fifth.

Tanner Reif finished second to his brother Tyler in the closest finish in Jr. Late Model history on July 28th. He made up for that performance by getting his first career win on Saturday night in the 70 lap feature. 15 drivers ages 10-16 years old took the green flag with defending champion Jesse Love leading from the pole.

Kabe McClenny had his night end prematurely when he slid up into Tyler Reif on a lap 10 restart in turn two. McClenny hit the wall and had to retire with damage.

Sixth starting Dylan Zampa, the incoming points leader, was the driver on the move as he worked his way up in to third by lap ten. Austin Edwards slowed with mechanical issues on lap 15 and was out of the race as well. Tanner Reif set a new track record in qualifying and drove from fifth up to second to challenge Love. The duo ran nose-to-tail for many laps until a caution on lap 23.

The restart allowed Dylan Zampa to snake into second but Reif took the position back on lap 34. Reif hounded Love all the way to lap 38 when Kayla Eshleman had an incident with Joey Iest in turn one. The scheduled lap 40 break occurred two laps early and Eshleman was removed from the race by race officials for her involvement.

The intensity level never faltered in the second half of the race as Tyler Reif took over third. Tanner Reif stormed to the lead on lap 48 and his lead over Love see-sawed from one car length to third car lengths over the rest of the race distance. On lap 65, Zampa charged back past Tyler Reif for third but he was too far behind the top-two to capitalize. Tanner Reif earned his first career win by .840 seconds over Jesse Love with Dylan Zampa third followed by Tyler Reif and Joey Iest.

MAVTV cameras were also rolling for the 14 car, 20 lap Mini Cups vs. Bandoleros. Bakersfield’s Kercie Jung took the lead on lap four and never looked back for the Bandolero win along with the overall win. The Mini Cup action was wild, punctuated by a lap one incident when the Bandolero of Ethan Nascimento spun in turn four. Both points leader Kale McClenny and Jayce McArthey were eliminated with damage while trying to avoid the spun out car.

Their misfortune thrust Napa’s Aaron Thomas into the Mini Cup fold as he held off Madera’s Joseph Holiday for the trophy. The Bandoleros swept the overall top-five led by Jung ahead of Seth Wise, Hank Hall, Zachary Ginn, and Trenton Eurto.

Legends of the Pacific presented 15 cars for a 35 lap feature and it was yet another redemption story. Sheldon Crouse had lost the August 11th race with a turn three spin on the final lap that involved Cody Winchel. The pair picked up where they left off, entertaining the fans with a battle that included four lead changes. Crouse finally made the decisive pass for the lead on lap 22. A caution on lap 26 brought the field back together but Crouse again drove away from Winchel. The top-five at the finish were Crouse, Winchel, Pete Soto, Chad Nascimento, and Braden Rogers.

Toyota Sedans was dominated by Jason Lawton, taking over the lead for the final time on lap 17 en route to a commanding victory. Recent race winner Greg Tyler was second ahead of 2016 champ Jillaun Holden and rookies Kyle Labrie and John Tevis, Jr.

Madera Racing on MAVTV airs Thursdays re-runs of the 2017 season every week. The show airs at 5 p.m. and 8 p.m. PST and is also available on the Lucas Oil Racing TV app. The fourth round of the RPM Mortgage Pro Late Models airs August 30th.