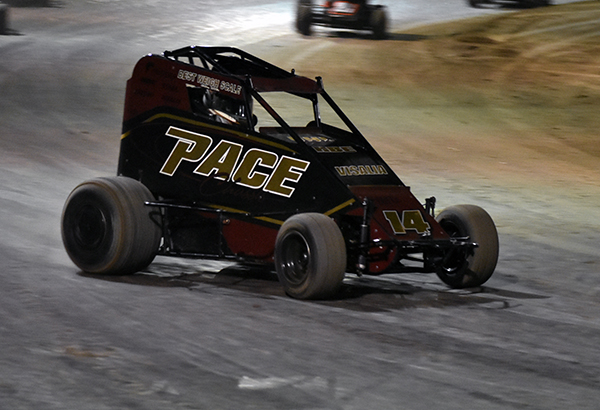 STOCKTON, CALIFORNIA (August 4, 2018) – Tyler “TJ” Smith won his fifth and sixth features of the year at Delta Speedway presented by Financial Center Credit Union on Saturday, leading a total of 45 laps for both the Super 600 and Non Wing victories.  His combined haul was $1000 on a busy night with 85 Micro Sprints in action at Stockton’s 1/7th mile dirt track.

Smith’s Non Wing win had a bit more drama including a failing right rear tire in the closing laps.  Bakersfield’s Brody Fuson took the lead from the outside pole as much of the field went upstairs early on.  A great battle developed for third between pole sitter Blake McGourty and Smith.  Smith finally got around McGourty on a series of slide jobs on lap seven.

Meanwhile Chad Laughton challenged Fuson for the lead in lapped traffic on lap nine.  Laughton dove inside in traffic and took the lead on lap 13 and Smith took second with him.  Smith did a double slider that passed both Laughton and a lapped car to take the lead on lap 16.

Laughton stayed in tow with Smith and took a look on lap 23 for the lead but couldn’t get the deal done.  Caden Sarale and Fuson battled for the third spot behind them as well.  Adam Kaeding stopped in turn two for a caution on lap 24.  Smith bobbled in turn two on the cushion on the restart but Laughton couldn’t capitalize.  A caution flew again for Anthony Valerio stopped in turn three on lap 26.

Smith brought the field up very slowly with the possible flat tire.  It bottled up the field and something broke on Fuson’s car from third for a caution on lap 27.  The final three laps were a wild scramble with Sarale sliding up into second past Laughton.  Laughton and his teammate JJ Bright put on a great battle for third down to the wire, going side-by-side through turn three to the finish.  Smith took the win over Sarale, Bright, McGourty, and Laughton.

Smith and Sarale were the front row starters for the 30 lap Super 600 feature as well.  Smith took the lead early while Sarale battled with long-time friend and foe Nikko Panella for second.  Michael Laughton joined the battling for a brief time on lap nine before the caution flew for Jessica McManus spun around in turn three.  Laughton ended up getting gathered up as well as he tagged the wall going around the fracas.  He was able to continue on from the rear of the field.

Panella finally got around Sarale for second on lap 13 with a slider in turn two.  Panella then went to work reeling in Smith in traffic on lap 17.  Alex Panella and 2016 champion Brandon Carey came together in turn four for a lap 22 caution.

2017 champion Jake Andreotti and Keith Day, Jr. staged a spirited battle for fourth before July 14th winner Dillon Horsley knifed in to take fifth from Day.   Smith managed a .611 second victory over Nikko Panella with Sarale a distant third for a double podium night.  Andreotti and Horsley rounded out the top-five.

Restricted’s $300 to win feature had fireworks of its own with points battle implications.  An eight car invert gave the top two in points Caeden Steele and Caden Stoll some work to do.  Devon Courtnier led the leaders into lapped traffic on lap seven before Speedweek champion Dylan Bloomfield took over on lap eight.

Meanwhile rookie Rickey Sanders took over third in the middle of a hornets nest of cars.  Steele started eighth and was up to fourth before halfway as well.  He overhauled Sanders for third and tried to bring Corey Day with him before a caution flew.  Rookies Otto Perreira and Jackson Kohler tangled in turn two for a lap 12 caution.  Day cleared Sanders on the restart and Logan Trevino also passed him, placing Sanders back to sixth.

Day used lapped traffic down the backstretch to nab third from Steele on lap 19.  Reiliee Phillips spun in turn three and was hit by Courtnier, forcing a restart with just three laps to go.  Day tried up stairs to go after Bloomfield for the lead.  The following lap the duo made contact into turn one, with Bloomfield nearly spinning before recovering in fourth.  Day crossed the stripe first but was penalized for his involvement, then disqualified for failing to go to tech after the race.  Caeden Steele inherited the victory as a result with Trevino scored second and Bloomfield a surprise third.  Stoll and Jade Avedisian rounded out the top-five.

Dalton Parreira extended his Jr. Sprints points lead with his second consecutive win and fifth of the season.  Austin Wood led the race from the pole and nearly had his race unhinged when Brody Rubio spun in turn two on lap nine.  Both Wood and Parreira narrowly avoided the incident but never lost power and maintained their top two positions in the field.

Parreira seized his opportunity to take the lead on a lap 11 restart, taking lap 12 and never looking back for the victory.  Wood held off Caleb Debem for third ahead of Colton Key and Selena Little.