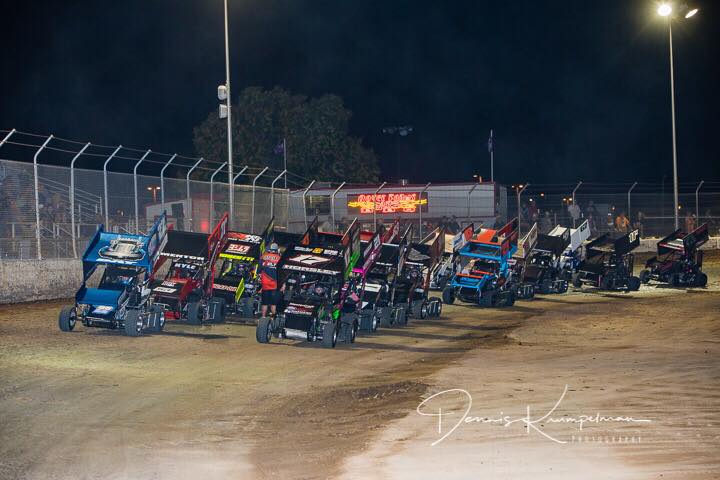 The last two points races at Delta Speedway have seen drivers sweeping both Super 600 and Non-Wing on the 1/7th mile dirt oval. Tyler “TJ” Smith of Fresno accomplished the feat on August 4th before Stockton’s Caden Sarale did the same on August 18th. Smith has won Non-Wing features during the first two runnings of the Dual and will look to continue that streak with $500 on the line in each 30 lap contest. Smith is also trying to preserve a 21 points lead over Sarale.

Valley Springs’ Dan Mognaga is a full 100 points behind Sarale from third in the championship followed by Stockton’s Brent Brooks and Madera Ranchos’ Dalton Hill.

Raio Salmon swept June’s Summer Sizzler and looked poised to run away with Super 600. The championship in that division has tightened considerably as well with Nikko Panella only two points behind. Sarale runs third in the Super points within striking distance with five points races to go. $500 is on the line in each 30 lap race for Super 600 as well.

Caeden Steele has preserved the Restricted 600 championship with three wins and a second place finish on August 18th. He enjoys a 27 point advantage ahead of Caden Stoll. Discovery Bay’s Dylan Bloomfield is third followed by Devon Courtnier and Ashlyn Rodriguez. Both nights will see Restricted race for 25 laps for a minimum of $300 to win.

Austin Wood won his first Delta Jr. Sprints victory of 2018 in the last round and has closed with 48 points of Dalton Parreira. Parreira’s five points wins matches Tyler Smith for the most at the track this season. Caleb Debem, Selena Little, and TK O’Brien round out the championship top-five. Their 20 lap features are for a guaranteed $200 to win.

Pit gates open at 1 p.m. each night of the Dual with a 4:30 p.m. drivers meeting. Hot laps, qualifying, and racing action follow.