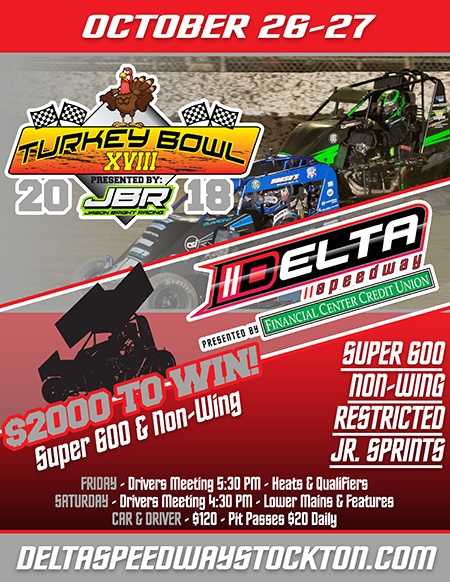 STOCKTON, CALIFORNIA (August 29, 2018) – Turkey Bowl XVIII presented by Jason Bright Racing will be one of the biggest Micro Sprints events in California when it hits Delta Speedway on October 26-27. Activities will be led by $2000 to win features for both the Super 600 and Non-Wing divisions. Restricted and Jr. Sprints purses will be announced soon for the weekend on the 1/7th mile dirt oval. All four feature purses could grow higher with additional sponsorship as well.

The festivities begin on Friday night where the Turkey Bowl tradition of racing into the show is the name of the game. The format of heat races and qualifiers with no time trials makes every lap critical. Saturday’s action includes lower mains, the popular pole shuffles, and feature racing.

Elk Grove Ford and Seros Racing has also come on board to sponsor Turkey Bowl.

Pit passes are just $20 each day with no membership required. Grandstand tickets each night are $10 for adults, $5 for kids 6-12, seniors 55+ and military, with kids 5 and under free!