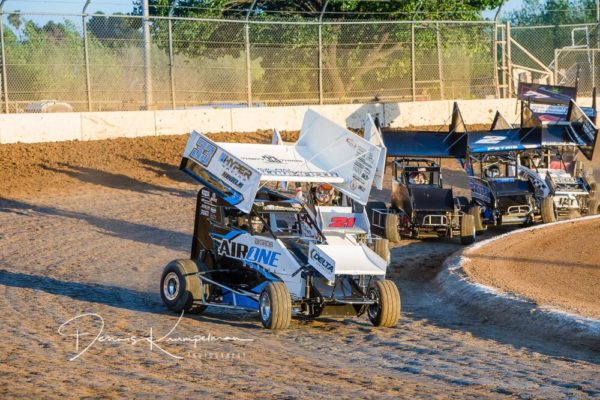 STOCKTON, CALIFORNIA (July 31, 2018) – A back-to-back stretch of races before back to school continues this Saturday at Delta Speedway with points race #9.  Financial Center Credit Union has presented a strong summer of dirt slinging racing at the San Joaquin County Fairgrounds, with a season long average of 100 cars per race night.

Non Wing continues to be the division that brings the largest car counts to the 1/7th mile dirt track with the closest battles for the lead.  That trend continued last weekend during the $500 to win, 30 lap feature where points leader Tyler “TJ” Smith and Mitchel Moles traded the lead over the final five laps of the main event.  Moles came out on top while Smith extended his points lead over 2015 Restricted champion Caden Sarale of Stockton to 14 points.  Valley Springs’ Dan Mognaga led early in the feature and has advanced to third in the standings followed by Stockton’s Brent Brooks and Madera’s Dalton Hill.

Raio Salmon is aiming to be the first female Super 600 champion at the track since 2007 when Brittany Evans achieved that feat.  Salmon has three wins and plus three more top-fours, for a total of six races inside the top-four in seven starts.  Both Nikko and Alex Panella finished last weekend in the top-five, with Nikko holding second in the standings over older brother Alex.

2014 champion Travis Labat and Sarale make up the rest of the top-five.  Saturday runner-up Jake Andreotti, the 2017 champion, is seventh after missing two rounds.  The championship should tighten up even more once each driver’s drop race is factored in.

Discovery Bay’s Dylan Bloomfield has had a remarkable run of success with three points wins and a Speedweek win at Delta this year but he still ranks third in the Restricted standings.  Caden Stoll’s two early season wins put him on top heading into the 25 lap, $300 to win main event on Saturday ahead of Caeden Steele, Bloomfield, Devon Courtnier, and Ashlyn Rodriguez.

Dalton Parreira is another Delta Speedway competitor on a tear with four victories in the Jr. Sprints division.  The wins give him a substantial 49 point lead over Austin Wood.  Wood leads a close battle for second over Caleb Debem and Jett Barnes with Selena Little in fifth.  The young drivers compete in a 20 lap feature for $200 to win.