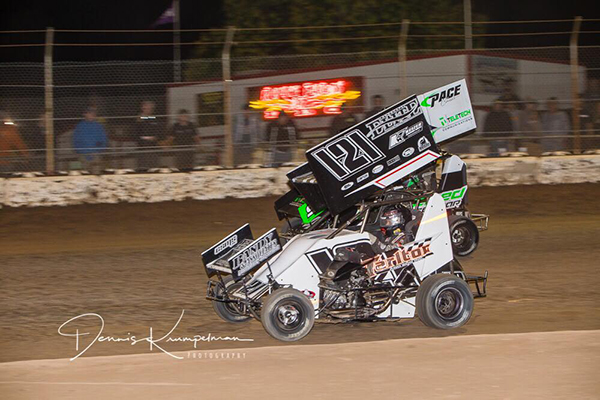 STOCKTON, CALIFORNIA (July 24, 2018) – The third annual Law Enforcement Appreciation Night is this Saturday night at Delta Speedway in Stockton, CA, where the Micro Sprint action will be held in tribute of the men and women in blue.  All law enforcement are invited to attend free of charge and to participate on the track during opening ceremonies.  Ceremonies include a memorial lap flying the “Thin Blue Line” flag and the Stockton Police Department Auxiliary presentation of colors.  Race fans are encouraged to wear blue as well.

The 1/7th mile dirt speedway presented by Financial Center Credit Union is having one of its strongest seasons yet.

Nowhere is the competition level more evident than Restricted, where the drivers ages 10-16 years old have thrilled the crowds all year long.  Caden Stoll enjoys a slim seven point advantage over Caeden Steele while Discovery Bay’s Dylan Bloomfield is on the hunt from third.  Bloomfield won the 2018 California Speedweek and won the recent King of California round at Delta on July 14th as well.  The former Jr. Sprint track champion is 44 points out of first.  Rounding out the top-five is Elk Grove area racers Devon Courtnier and Ashlyn Rodriguez.

The featured Super 600 division is still anchored by Fresno’s Raio Salmon, fresh off of a runner-up finish in the last event.  Salmon leads former Restricted California Speedweek champion Nikko Panella of Stockton by 40 points with 2014 champ Travis Labat in third.  Alex Panella and former Restricted track champion Caden Sarale round out the top-five.  $500 is on the line in every 30 lap feature for the series, courtesy of FCCU.

Tyler “TJ” Smith has seemed dominant in the Non Wing division, but has to be on his toes with a scant nine point lead over double-duty racer Caden Sarale.  Dalton Hill has leap frogged Summer Sizzler sweeper Dan Mognaga for possession of third in the order with Stockton’s Brent Brooks advancing to fifth in the championship.

The youngest drivers in the Jr. Sprints have been chasing Dalton Parreira all season.  Parreira has been on the podium all six races, with three of those resulting in wins.  Austin Wood is second ahead of Visalia youngster Jett Barnes.  Caleb Debem and TK O’Brien round out the top-five.

Pit passes are just $20 with no membership required. Grandstand tickets are $10 for adults, $5 for kids 6-12, seniors 55+ and military, with kids 5 and under free!  All law enforcement are free on Saturday night as well!