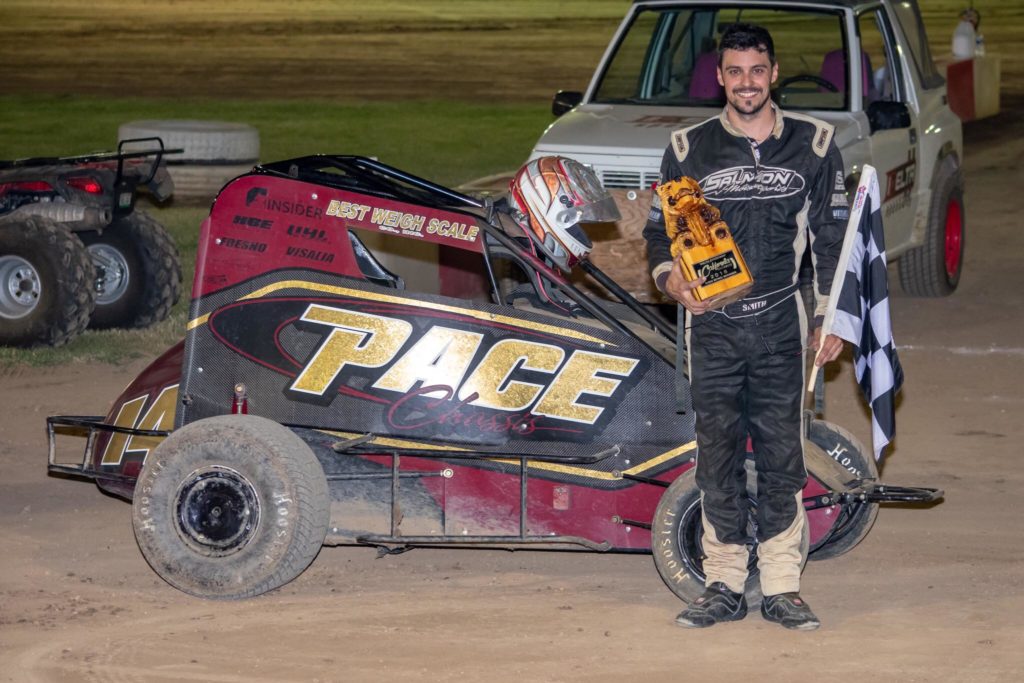 STOCKTON, CALIFORNIA (June 28, 2018) – Tyler “TJ” Smith extended his record-breaking California Speedweek career, grabbing Wednesday’s Non Wing feature at Delta Speedway.  His victory in the fourth annual event moves him past $12,000 earned along with being his fourth career win and leading the series in laps led as well.  Michael Faccinto and Dylan Bloomfield also won California Bears during the evening.

111 race cars lined the pits at the 1/7th mile dirt oval in Stockton that is presented by Financial Center Credit Union.

Smith was the high point car after qualifying and heat races then drew the pole position for the 30 lap feature.  Smith jumped out to the early lead with nearly the entire field moving upstairs.  The bottom line proved tough for 2017 Delta Speedway champion Koen Shaw as he drifted back to seventh.

Shaw dove inside Arizona’s Colton Hardy which took away his momentum.  Shaw then spun trying to gather it back up against Chad Laughton for a caution.

Smith had a dynamite restart while the field continued to work the top.  An accordion effect of slidejobs caught out Stockton’s Caden Sarale, sending him spinning in turn four for a caution on lap seven.

Mitchel Moles charged past Hardy and then turned his attention to Ben Worth before a caution for Dan Mognaga stopped in turn two.  Bakersfield’s Brody Fuson spun in turn two and was collected hard by Justyne Hamblin for a caution on lap 13.  Fuson managed to continue but Hamblin was done for the night.  Bakersfield’s Troy Morris III and Jimmy Leal were the next duo to have an incident in turn two for a lap 14 caution.

Jason Bright gave up fourth on the restart with both Worth and Moles driving past him.  Lapped traffic came into play while Smith enjoyed a straightaway lead.  2016 Delta champion Brandon Carey hounded Austin Stone for second place behind the leader while Smith navigated treacherous traffic.

Side-by-side lapped traffic threatened to end the run to the win for TJ Smith but he managed to succeed with three wide maneuvers to take the $1,000 victory.  Oak Farm Vineyards Fast Time qualifier Stone was second ahead of Carey, Moles, and Worth.  James Ringo drove from 21st to 11th to win the Hoosier Tires Hard Charger.

Restricted’s 25 lap feature had its share of moments before a familiar victor emerged.  2018 Tulsa Shootout winner Corey Day led from the start of the race from the pole position.  In a contrast to the Non Wing feature, much of the pack chose the inside line for the opening laps.  Day and opening night winner Dylan Bloomfield of Discovery Bay led the way comfortably before a caution for Jade Avedisian spinning on lap seven.

Madera’s Jake Smith surrendered fourth when he pitted into the infield on lap 11.  The race went green until lap 13 when Avedisian and Blaine Baxter had a mix-up in front of the leaders in turn two. By that point, Caeden Steele was up to fifth from ninth starting position while Washington’s Lane Taylor had driven from 18th to 11th.

Steele nabbed fourth from Jeffrey Pahule, Jr. on the restart and tried to reel in the top three.  Avedisian and Oklahoma’s Ryder Laplante had an incident in turn two that slowed things again on lap 16.

Day was placed two positions back under the caution for hitting the restart cone.  The penalty placed Bloomfield and Ashlyn Rodriguez into the top-two positions but their restart was nullified when a car deeper in the order tagged the cone.  Day used the outside to get around Rodriguez by lap 21 before a caution on lap 22 erased Bloomfield’s advantage on the field when Caden Stoll spun in turn two.

Day had a shot at Bloomfield and the two made contact coming to the cone, with Day making contact with the cone as well.  Day was put back two positions yet again.  Bloomfield drove away over the final restart for back-to-back $1000 wins to open speedweek ahead of Rodriguez, Steele, Day, and Hoosier Tires Fast Time qualifier Brian Gilbert.  Colorado’s Chase Hyland won the CSI Shocks Hard Charger prize.

The championship battle in Super 600 is beginning to take shape with two of the top names in the division showing their hands early this year.  Polesitter Michael Faccinto of Hanford displayed a masterful performance to lead wire-to-wire in the 30 lapper.

Faccinto managed to gap the field by five car lengths on many of the early restarts, initially allowing Cody Christensen to look inside Dixon winner Jake Hagopian for second.  2017 Delta champion Jake Andreotti used the outside to pass Ben Worth for fifth on lap 12 when the caution flew for the first time.  Summer Sizzler sweeper Raio Salmon used her familiar bottom line to try to get fifth away from Andreotti.

Andreotti then swooped past both Salmon and Australian Liam Williams to take fourth on lap 21.  Faccinto charged into lapped traffic on lap 23.  Fresno’s Ryan Delisle had issues in turns one and two twice for cautions on lap 26 and 27.

The final three lap run to the finish saw Hagopian attempt a few inside looks on the turn three end of the race track, but Faccinto drove away from each of them.  Faccinto earned his second Delta Speedweek win of his career ahead of Hagopian, Andreotti, Christensen, and Williams.  Joey Ancona was the Hoosier Tires Hard Charger in the feature.

The California Speedweek is off on Thursday night before concluding Friday at Keller Auto Raceway at Plaza Park and Saturday at Lemoore Raceway.  Pit gates at noon with drivers meeting at 3:30 p.m. and racing to follow both nights.

Race fans who can not attend the California Speedweek in person can view the action through streaming partner Fast Four Media.  The remaining two nights will be offered for $20 per night. Bullet Impressions will have event merchandise available all week as well.