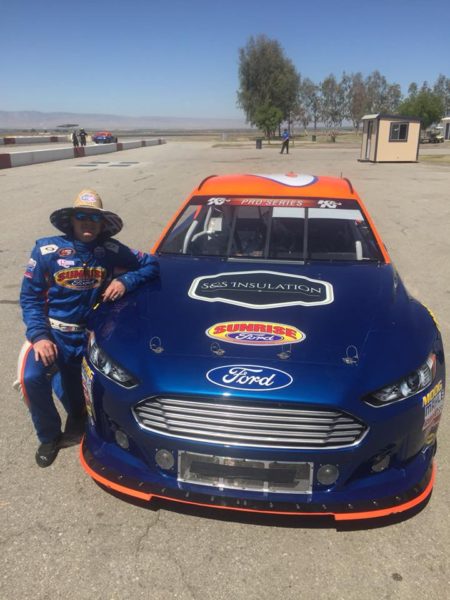 Thorn won the 2013 visit at Sonoma en route to the 2013 NASCAR K&N Pro Series, West championship driving for Sunrise Ford.  He has surrounded that effort with four SPEARS SRL Southwest Tour victories.  A pair of wins last weekend at Kern County Raceway Park in Late Model competition has propelled Thorn to 79 total asphalt wins.  He heads into Sonoma Raceway with a perfect slate of five consecutive podiums in the West Series, highlighted by a victory at Colorado National Speedway where Bob Bruncati’s entries swept the podium.

A victory in 2018 could spark another championship run and having long time friend Sal Martinez and S&S Insulation on board would make the wine in victory lane even that much sweeter.

“Sonoma is the closest track we race at to my hometown of Lakeport so I find it fitting to get to represent my good friend right in our backyard,” Thorn said.  “I really hope we can carry the momentum we’ve had so far this year into this weekend and do S and S Insulation, Sunrise Ford and all our partners proud in front of some hometown fans.”

Sal Martinez’ company has deep ties in the Sonoma and Napa areas, going to work during the “Sonoma Rising” initative to rebuild after devastating wildfires last year damaged many homes and businesses around the region.  The Santa Rosa-area based company is making its first foray into motorsports with the sponsorship.

“Its an honor to be sponsoring Derek and we’re glad that Bob gave us the opportunity,” Martinez said.  “We are beyond fortunate.  Glad to have a champion like Derek driving for us with his talent and resume!”

Activities get underway on Friday with practice from 1:05 to 2:25 p.m. on the 1.99 mile road course.  Saturday will see group qualifying at 10:15 a.m. with the Carneros 200 going green at 1:30 p.m.  The race is part of the Monster Energy NASCAR Cup Series weekend and will be televised on NBCSN for airing on Thursday June 28th at 3 p.m. Pacific time as well.