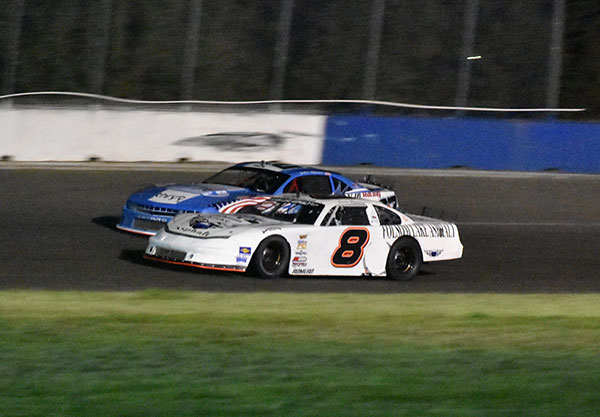 SACRAMENTO, CALIFORNIA (June 20, 2018) – The Shasta District Fairgrounds will come to life with the touring stars of the Pacific Challenge Series on Saturday, with a large contingent of drivers from across Northern California expected at Shasta Speedway.  The fourth round of the PenneyLawyers.com backed series brings Super Late Models to the 3/8ths mile for their second appearance of the year.

Bombers, Hornets, and Legends will also be competing and all fair tickets will include admission into the races.

In April, Jason Romero of Cameron Park, CA set a sizzling track record lap of 15.428 seconds that he parlayed into the race victory.  Romero’s victory also is part of his points leading season.  Romero was eighth at Madera in March before the Shasta win in April and a runner-up finish at Ukiah in May.  His points lead is a narrow two points over former series champions John Moore of Granite Bay and Mike Beeler of Modesto.

Moore, the 2015 series champion, has had a consistent campaign with finishes of third, fourth, and fifth.  He nearly won the $5,000 to win Limited Late Model event at Roseville last weekend.  His career best PCS finish at Shasta is a second place run in 2017.

Beeler, winner of the 2014 and 2017 titles, has seen his season go the exact opposite direction of Moore.  His year opened in fifth at Madera before fourth at Shasta and third at Ukiah.  He’d like to improve two spots better for his first Shasta win on Saturday.  His third place in April was his best career finish at Shasta in three PCS starts.

Cole Moore’s Ukiah victory was his second career win in the PCS and has propelled him to fourth in the standings.  He opened the year with a pair of DNFs including a tenth place result at Shasta.  The 2015 PCS Rookie of the Year made his Shasta debut in 2016 with a career-best third place finish.

Rounding out the top-five in the championship is Dave Byrd of French Camp, CA.  The multiple-time stock car champion had a runner-up finish with the SRL Southwest Tour in 2007 along with a win and a second place finish in the prestigious Win-River 125 on the old 1/3rdmile configuration in the 1980s.

The remaining full-time car thus far has been 2016 Rookie of the Year Matt Wendt of Galt, CA.  Wendt has not yet finished a PCS race this season but carries high expectations into Shasta.

Other competitors that travel with the PCS expected at Shasta include Roseville’s Shannon Mansch, Ukiah’s John Dalerio, and Elk Grove’s Mike Hite.  Former NASCAR K&N Pro Series, West driver James Bickford will compete for Matt Scott Racing in the #35 Chevrolet.  Bickford previously had a runner-up finish when the West came to Shasta in 2015 for the Bill Schmitt Memorial.

There will be no Friday practice due to the Shasta District Fair.  PCS competitors will get a special practice session early Saturday instead.  Pit gates will open at 10 a.m. with practice from 12 p.m. to 2 p.m.  Regular cycles of practice sessions for all four divisions competing will follow, with qualifying at approx. 5 p.m. and racing at 6 p.m.  The 100 lap PCS feature will wrap up the exciting night of action at approx. 9 p.m.