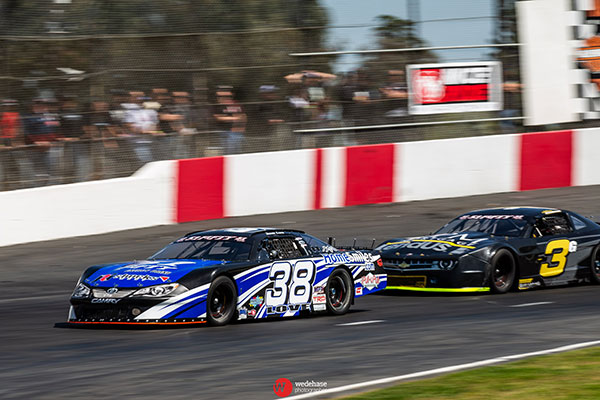 MADERA, CALIFORNIA (June 25, 2018) – Both the RPM Mortgage Pro Late Model Series and the 51FIFTY Energy Drink Junior Late Model Series return to Madera Speedway this weekend to headline the “Reverend Ron Spencer Red, White and Blue Classic” featuring post-race fireworks.  The MAVTV-televised series will be joined on the one-third mile asphalt oval by 48 lap races for the Modified Super Toyotas and Toyota Sedans plus the Mini Cups vs. Bandoleros series.

Over 300 laps of stock car action will be presented in honor the late Ron Spencer, who was the long time track chaplain before passing away last year.  The MST and Toyota Sedans extra distance races are a tribute to Jeff Doran as well.

Modesto’s Garland Tyler is third in the standings followed by a surging Racin Vernon of Bakersfield.  Vernon picked up his first victory with the series during Military Tribute Night to move up to fourth in the championship.  Dos Palos’ Ryan Hart rounds out the top-five.  A strong 16 car field competed in last weekend’s Madera Late Model Series non-TV race with Bakersfield’s Buddy Shepherd grabbing the win.  Over 30 Pro Late Models are expected this weekend including a double duty effort from Kayla Eshleman in both Pro and Jr. Late Models.  $500 will go to the winner of the 25 lap B Main before the 80 lap feature that is split over two segments for $2000 to win.

Winning two of the four races so far, Jesse Love IV of Menlo Park has extended his points lead in the 51FIFTY Energy Drink Jr. Late Model Series.  Love is looking to become the series’ first repeat champion.  He is followed by fellow two-time winner Dylan Zampa of Napa.  The 14 year-old is 18 points behind Love.  Las Vegas’ Tanner Reif has drifted to third, 32 points behind, with the top-five rounded out by Bakersfield’s Kabe McClenny and third year driver Austin Edwards.  An 80 lap feature is scheduled for these drivers ages 10-16 years old.

Rounding out the MAVTV-televised divisions is the upstart Mini Cup vs. Bandoleros series.  Bakersfield drivers have dominated this “race within a race” competition with Kercie Jung, Riley Massey, and Seth Wise all scoring Bandolero wins.  Bakersfield’s Kale McClenny won the first three Mini Cup races but an incident late in the May race allowed Placerville’s Jayce McArthey to get his first career Mini Cup main event win.  The youngest racers at Madera Speedway will compete in a 20 lap feature.

Patrick Geiger leads the Modified Super Toyota standings as the division heads into its longest race.  The 48 lap feature is split across two 24 lap segments.  Geiger’s lead over Ryan Reynolds is 18 points with 2017 champion Bert Stephens only 19 points out of first as well.  Shaun Reynolds picked up the most recent MST victory.

2016 Toyota Sedan champion Jillaun Holden has had little issue with the growing fields in the division, charging to six main event wins this year.  Her points lead stands at 73 over Thomas Magray with rookie Greg Tyler rounding out the top-three.  Their 48 lap event is also spread across 24 lap segments.

Action gets started on Friday evening with practice from 5 p.m. – 8 p.m.  Saturday’s program begins with pit gates opening at 10:30 a.m.  Practices run from 12:15 – 2:15 p.m. with qualifying and heat races to follow.  The first set of main events starts at 4:15 including the Mini Cup feature and the Late Model B Main.  Opening ceremonies are at 5:30 p.m.  The huge fireworks show will take place sandwiched in the middle of the program at approximately 9 p.m. with the 30 lap conclusion for the RPM Mortgage Pro Late Model feature immediately following.

Madera Racing on MAVTV airs Thursdays re-runs of the 2017 season every week.  The show airs at 5 p.m. and 8 p.m. PST and is also available on the Lucas Oil Racing TV app.  Round #2 of the RPM Mortgage Pro Late Model Series from April airs on Thursday July 5th.