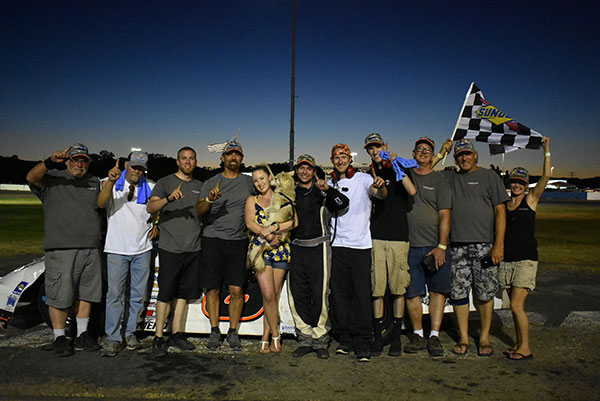 Cole Moore jumped out to the early lead while Coquille, OR’s David Miller fell backwards from the outside line.  Mitchell drifted backwards as well when John Moore took over third on lap six.  Mitchell found himself pinched outside and he fell back to seventh by lap eight.

Romero hounded Cole Moore much like he did at the Ukiah race in May.  Romero took several looks inside Moore on both ends of the race track, and the duo went side-by-side as they lapped Dave Byrd in a three-wide move on lap 33.

The continual challenges paid off when Romero took the lead on lap 36.  John Moore passed Cole a few laps later for second allowing the top-two in the points to hold the top-two on the race track.

Anderson’s Derek Copeland passed Napa’s James Bickford for fifth on lap 50 and Modesto’s Mike Beeler fell down a lap on lap 52.  The race finally had its first caution in the grueling affair on lap 61 when Ryan Lentz spun in turn four.  Matt Wendt escaped to the pits just before the caution and did not return.

Copeland and Mitchell used some sneaky maneuvers to knife up into third and fourth on the restart with Cole Moore relegated from third to seventh.  Cole Moore tried to challenge James Bickford before Bickford’s night ended when he slowed for a caution on lap 74.

The ensuing restart was a wild one when Romero led the field to green and had contact with third place Copeland.  Romero came to a stop in the infield and officials deemed it a false start.  Romero was able to get a second chance inside John Moore and motored away while Moore and Copeland made contact that sent Moore up the hill in turn one.

Cole Moore tagged the wall on the front stretch and retired to the pits on lap 81, putting all eyes on the battle for second between Copeland and John Moore.

Jason Romero cruised home to victory to the appreciative crowd.  The battle for second had a wild run to the finish side-by-side, bouncing off of each other, with John Moore narrowly nipping Copeland at the stripe.  Miller and Hite rounded out the top-five.

Romero will enjoy a four point advantage on Moore in the standings when the series resumes on July 21st at Stockton 99 Speedway.